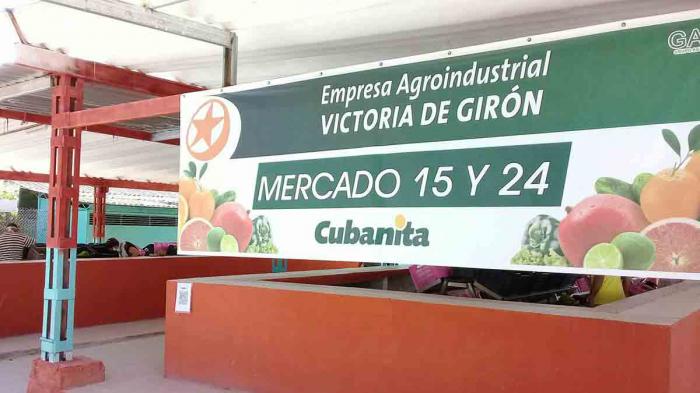 In the central corner of 15 and 24, of the Plaza de la Revolución municipality, residents organized to buy food and fruit at the new type of State Agricultural Market created there, which is part of 47 that will open in the capital.

Luís Antonio Torres Iríbar, member of the Party’s Central Committee and first secretary in the province, and Reinaldo García Zapata, Governor of Havana, spoke with workers and managers of the Victoria de Girón Company, from Jaguey Grande, Matanzas, in charge of attending this place.

Iríbar explained to them the importance of their work at a time when formulas are being sought to bring production systems closer to the direct marketing of lines.

Those 47 markets together with those served by the Storage Company add up to 91 aimed at expanding the offer of different assortments.

In addition to food and fruit, the counter had preserves and juices made in mini-industries.

Guarantee the sustainability of new markets

To look for alternatives that guarantee the sustainability of the new markets that operate in Havana with the direct attention of business groups and agricultural companies, said Torres Iríbar.

In the reconditioned facility in the Pan-American Village, of the Cojímar Popular Council, of the municipality of La Habana del Este, the party leader spoke with workers and members of the Ganadero Group, who tend the place.

Expansion work continues at the establishment and they have flower beds that guarantee the supply of fresh vegetables. Among the offers are meats, vegetables, fruits, grains and meat.

Huge warehouses located in the rural town of Bajurayabo house the new mini-industry of the same name that was inaugurated in greeting to July 26, on the 68th anniversary of the assaults on the Moncada and Carlos Manuel de Céspedes barracks.

In the capital city of Havana del Este, some 36 workers are inserted into different production processes in the center that began assembly last May and had a month of tests.

With a processing level of one ton per hour, they also have a profit center for meats, vegetables and fruits.

In the same place a store of the GELMA Company operates, to offer tools and articles for farmers in the area.

Jams, sweets and packets of lines to make soup are included among the assortments intended for various forms of marketing and which were visited by Luis Antonio Torres Iríbar and Reinaldo García Zapata, First Secretary of the Party and Governor, respectively, of the city.

The day of meetings with groups of workers, health workers and peasants of the highest authorities of Havana, this Sunday, in greeting to July 26, included exchanges with Bárbara Sandra Rolo Rubio, owner of Finca La Mora, of the Cooperativa de Creditos y Servicios Agustín Marrero, in the Guanabo Popular Council.

In the capital city of La Habana del Este, they exploit local resources to obtain viands, vegetables and fruits, they produce organic matter and they created grow houses and seeds that they fertilize with the compost they obtain from earthworm humus.

Approve “garage sales” as a form of retail marketing

Cuban government on private sector: “we all have the responsibility to build a prosperous and sustainable socialist society”