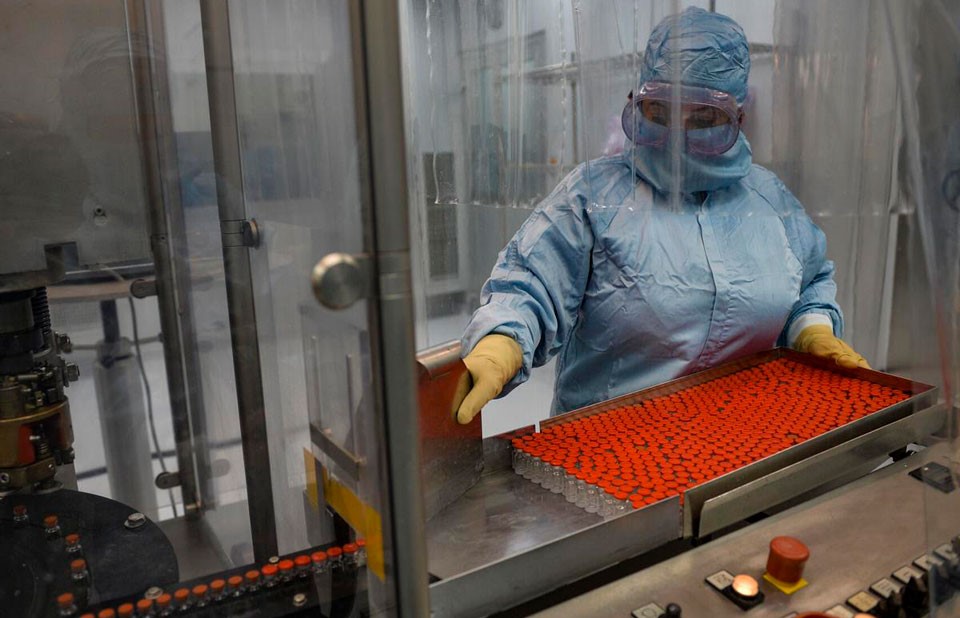 Cuba’s socialist approach to developing vaccines against Covid-19 differs strikingly from that of capitalist nations of the world developing vaccines. Socialist Cuba’s production of four vaccines is grounded in science, in dedication to saving the lives of all Cubans, and in international solidarity.

Cuba is the only vaccine manufacturer in Latin America; there are none in Africa. The only state-owned entities producing the leading vaccines are those of Cuba and Russia.

Cuba’s Finlay Vaccine Institute has produced two Covid-19 vaccines. Trials for one of them, called Sovereign I, focus on protecting people previously infected with Covid-19. It turns our that the antibody levels of some who have previously been infected are; the vaccine might provide a boost.

The other vaccine, Sovereign II, is about to enter final human trials. For verifying protection, these trials require tens of thousands of subjects, one half receiving the vaccine and the other half, a placebo vaccine. Ironically, due to its effective public health measures, Cuba lacks enough people likely to be infected, making it difficult to test the vaccine’s protective effect. That’s why Sovereign II will be tested in Iran.

100 million doses of Sovereign II are being prepared, enough to immunize all 11 million Cubans, beginning in March or April. The 70 million remaining doses will go to Vietnam, Iran, Pakistan, India, Venezuela, Bolivia, and Nicaragua. Sovereign II “will be the vaccine of ALBA,” explained Venezuelan Vice President Delcy Rodríguez, referring to the solidarity alliance established in 2004 by Venezuelan President Hugo Chavez and Cuba’s Fidel Castro.

“Cuba’s strategy in commercializing the vaccine represents a combination of what’s good for humankind and the impact on world health. We are not a multinational where a financial objective comes first,” says Vicente Vérez Bencomo, director of Cuba’s Finlay Vaccine Institute. Income generated by vaccine sales abroad will pay for health care, education, and pensions in Cuba, just as is the case with exports of medical services and medicines. Cuba’s Center for Genetic and Biotechnological Engineering is developing two other Covid-19 vaccines; One, named “Mambisa” (signifying a female combatant in wars of liberation from Spain), is administered via the nasal route, just as is Cuba’s hepatitis B vaccine.  The other vaccine, named “Abdala” (a character in a Jose Marti poem) is administered intramuscularly. The two vaccines are involved in early trials.

Cuban education emphasizes science and technology. Cuban scientists work in the 50 or so biomedical research and production facilities making up Cuba’s state-owned BioCubaFarma Corporation, which has developed vaccines, drugs, medical tests, and medical equipment. It makes 60% of medicines used in Cuba, and 8 of 12 vaccines. In the 1990s, Cuba accounted for 11% of doctorate-level Latin American scientists.

Cuba has already produced a pioneering vaccine that prevents life-threatening infection caused by type B meningococcus. It developed a genetically-engineered hepatitis B vaccine. It pioneered a vaccine offering palliative treatment for lung cancer. Infection by the most common cause of childhood meningitis, Hemophilus Influenza type B bacterium, can now be prevented by a Cuba-developed vaccine.

To provide an immunological extra, the antigen of Cuba’s Sovereign II vaccine is mixed with tetanus toxoid, as was done with Cuba’s Hemophilus influenza vaccine. As with other vaccines, scientists used a segment of the virus’s protein – here the Covid-19 virus – to form an antigen to stimulate protective antibodies. By contrast, the U. S. Pfizer and Moderna vaccines contain the whole viral protein, not a segment. That protein contains “genetic instructions” which enter human cells, causing them “to make spike proteins, which then get released into the body” where they trigger antibodies.

Observers suggest that this innovative U.S. technology may be less safe than the one used in Cuban vaccines.  Not requiring extremely cold storage, as do the U.S. vaccines, the Cuban vaccines are suited for areas where refrigeration may be inadequate.

The U. S. approach to producing and distributing Covid-19 vaccines is not like that of Cuba. The U. S. government delivered billions of dollars to pharmaceutical companies to produce vaccines free of charge to recipients. The companies have contracted with purchasers abroad.

According to forbes.com in November, 2020,  ‘If Moderna’s [vaccine] can get FDA approval and can make enough doses, its top line could be nearly $35 billion higher … than … in the last 12 months.” Another report suggests that, “The companies (Pfizer and Moderna) stand to earn billions of dollars in profits from their COVID vaccines this year [and] there will be more profits in later years.” The companies “claim the rights to vast amounts of intellectual property.”

With corporations in charge, distribution of Covid-19 vaccines is skewed. As of Jan. 27, “some 66.83 million doses have been sent out, of which 93 percent were supplied to only 15 countries.” In Latin America, only Brazil, Argentina, Mexico, and Chile have secured purchase contracts adequate for immunizing entire populations. The companies’ contracts with African nations allow for immunization of only 30 percent of Africans in 2021. Meaningful immunization has yet to begin there.

The wealth divide determines distribution. Epidemiologists at Duke University report that, “While high-income countries represent only 16% of the world’s population, they currently hold 60% of the vaccines for COVID-19 that have been purchased so far.” Cuban journalist Randy Alonso reports that only “27 percent of the total population of low and middle income countries can be vaccinated this year.”

“The world is on the brink of a catastrophic moral failure – and the price of this failure will be paid with lives and livelihoods in the world’s poorest countries,” declared Dr. Tedros Adhanom Ghebreyesus, director of the World Health Organization, on January 18.

The WHO initiated a global vaccine collaboration, COVAX, to assure access by poor nations to Covid-19 vaccines. The 190 nations that are enrolled agreed to obtain vaccines through COVAX. Rich nations would supply COVAX with funds to enable 90 poor nations to receive no-charge vaccines. COVAX anticipates distributing two billion doses, enough to immunize only 25 % of the populations of poor nations during 2021. But Dr. Ghebreyesus warns that countries and companies are driving up prices and attempting to jump to the front of the line by going around COVAX and making their own bilateral deals.

Cuba, on the other hand, is removed from this prevailing vaccine-distribution network. Many of the capitalist nations involved are distant from Cuba in their own way. Pursuing regular business, they all too easily adjust to U.S. regulations used to enforce that government’s economic blockade of Cuba. Offering little substantive resistance to the blockade, they are complicit, we think, in that cruel U.S. policy. The U.S. blockade hinders Cuba’s vaccine efforts, and the other capitalist nations are not blameless.

“In Cuba we don’t have all the raw materials and supplies we’ll need for the unprecedented scale of production that vaccinating our whole population requires,” Dagmar García-Rivera, Director of Research at Cuba’s Finlay Vaccine Institute, explained. “They have to be purchased and for this, we need financing. This is made infinitely more difficult by the US embargo … Procuring the necessary reagents for research and the raw materials for production is a challenge we face every day.”

In confronting the pandemic, Cuba exhibits an attention to detail that itself suggests a level of caring not readily matched elsewhere. For example, Cuba’s government-friendly cubadebate.cu website provides a daily, detailed update of the infection’s impact. Its report on Jan. 27 presents data relating to cities, provinces, the nation, and the world – and the nation’s intensive care units. Readers learn that of 43 patients in intensive care that day, 16 were in critical condition, stable or unstable, and 27 were in “grave” condition.

All 43 cases are reviewed, beginning with: “Cuban citizen, 75 years old, from Alquízar, in Artemisa, already suffering from arterial hypertension and ischemic cardiopathy who is afebrile, on mechanical ventilation, is hemodynamically stable… with acceptable blood gases (oxygen and CO2), is improving radiologically with inflammatory lesions in the right [lung] base – reported as critical but stable.” The cases of four Cubans who died that day are also presented.

Fighting a pandemic in Cuba, one realizes, is no casual matter. Nor is the health of Cuba’s people.

[W.T. Whitney Jr. is a political journalist whose focus is on Latin America, health care, and anti-racism. A Cuba solidarity activist, he formerly worked as a pediatrician, lives in rural Maine.]