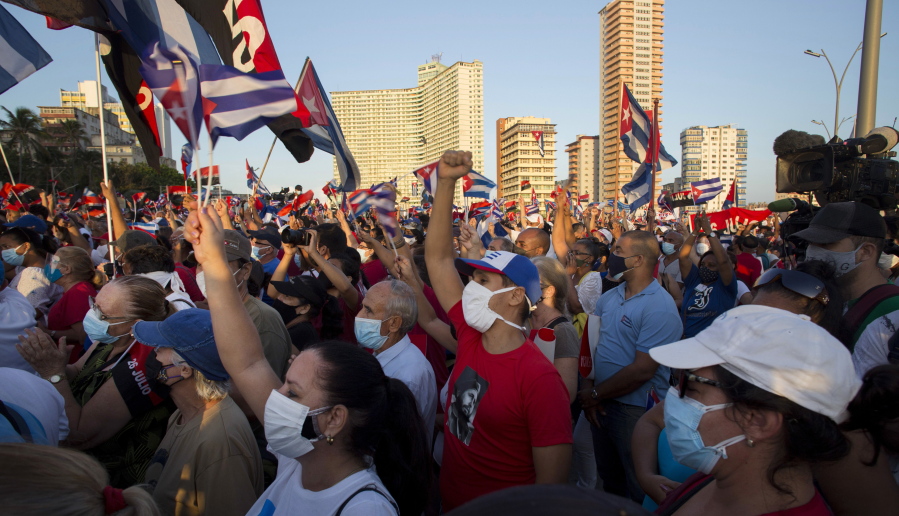 HAVANA — Cuban officials rallied tens of thousands of supporters in the streets on Saturday — nearly a week after they were stunned by the most widespread protests in decades.

President Miguel Díaz-Canel— accompanied by 90-year-old former President Raul Castro — appeared on the seafront Malecon boulevard that had seen some of the largest protests against shortages and the political system the previous weekend.

He made an impassioned speech blaming unrest on the U.S. and its economic embargo, “the blockade, aggression and terror,” as a crowd waved Cuban flags and those of the July 26 Movement that Fidel Castro led during Cuba’s revolution.

“The enemy has returned to throw all it has at destroying the sacred unity and tranquility of the citizens,” he said.

He ended without the traditional cry of “Homeland or Death!” — a slogan mocked last week by protesters shouting, “Homeland and life!”

Havana has been returning to normal in recent days, even if mobile internet data service – which authorities cut on Sunday – remained limited.

“There is political and social erosion … There is a lot of disgust, we must talk more, do more things and things that were done wrong should be rectified,” said Abel Alba, a 50-year-old civil engineer, speaking Friday. “The president has tried to smooth things over a bit” but he waited “too long” to listen to the demands of the people in the streets.

The protests began Sunday when thousands of Cubans marched along the Malecon and elsewhere to protest food and medicine shortages, power outages and some even calling for political change. Smaller protests continued MOnday and Tuesday.

Díaz-Canel initially responded by pointing to U.S. economic sanctions, the impact of the coronavirus pandemic and a social media campaign by Cuban American groups. But he later acknowledged some responsibility by Cuba’s leaders.

With this in mind, Cuban Cabinet ministers announced a mix of measures including permits for travelers to import food and medicine without limits and allowing people to use their ration books to obtain subsidized goods outside their hometowns.

“The Cuban government has just shown that it could have allowed the entry of food and medicine without quantity limits or tariffs all along but chose not to do so for more than a year of the pandemic,” wrote José Jasan Nieves, director of the independent digital newspaper, El Toque. “People twisted their arms.”

Authorities reiterated their intentions to finish authorizing small and medium-sized companies as a source of employment as well as a program for state companies to pay more than the current salary scale.

What officials also made clear is that they are not willing to make changes to the island’s political model.

Street vendor Marlén Rodríguez, 66, was not optimistic following the government’s announcements. “There are no medicines, there is nothing, there is no food.”

According to Díaz-Canel, there were four sectors involved in the protests: radical supporters of the United States who waved that country’s flag during the protests and demanded intervention from Washington, criminals who took advantage of the situation to loot, people genuinely desperate due to the impact of the crisis on their daily lives and young people who feel disenfranchised.

“When people with weak minds let themselves be influenced, these things like what happened on Sunday occur,” said Tal(ia Linares, a 19-year-old student who turned out for Saturday’s rally. “So we are here to show that that isn’t Cuban youth.”

On Friday, the United Nations High Commissioner for Human Rights, Michelle Bachelet, called for the release of the protesters.

The measures announced by the government “are positive measures, but they are insufficient,” said Cuban economist Omar Everleny Pérez.

“Without affecting the ideology, there is a lot of space in which the state can take action,” he said, mentioning permits for private entrepreneurs to import goods without going through the state monopoly, allowing foreign companies to install retail markets or raising the ceiling for agricultural prices in order to increase supply.

But political analysts said the economic challenges are great.

“I think the government is just trying to signal to people that it understands their desperation and that it’s going to try to alleviate some of the misery that they’re experiencing. The problem is that the government just doesn’t have much in the way of resources that it can devote to doing that,” said William LeoGrande, an expert on Cuba at the American University in the United States.

LeoGrande said the unrest in Cuba and the assassination of Haitian President Jovenel Moïse have put the Caribbean back on the agenda of U.S. President Joe Biden.

“There is no question that the demonstrations in Cuba and the assassination of Haiti’s president and the resulting unrest there have pushed the Caribbean to the top of President Biden’s foreign policy agenda, even though they would have preferred that it stayed on the back burner for a much longer time,” he said. “What the administration will do on Cuba is still very much up in the air.”