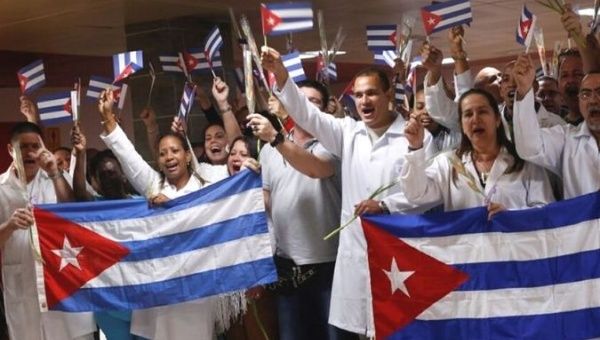 Despite Trump’s sanctions, Cuba advocates international solidarity as the only way to overcome this pandemic.
It is hardly surprising that the Trump Administration walked back from one of Obama’s signature foreign policy moves.

Donald Trump has worked to undo relations between the United States and Cuba, as he has done to other hallmark programs established by the Obama Administration. After a brief period of detente following Obama’s 2014 announcement that ties would be normalized, they have once again soured.

Even so, the cruelty of U.S. sanctions under Trump—including the recent blocking of 100,000 facemasks and ten COVID-19 diagnostic kits donated by Chinese billionaire Jack Ma—is still jarring.

Yet, despite the continued and intensified efforts to bend the island to the will of the United States, Cuba remains ready to help its longtime adversary in dealing with the COVID-19 pandemic, according to a recent interview with Cuba’s top official in North America.

“I am sure that if the current United States government asks us for assistance to confront COVID-19, Cuba would provide it,” Josefina Vidal, Cuba’s Ambassador to Canada told The Progressive. “Cuba advocates that solidarity, the need to put aside political and ideological differences between countries and cooperation among all, is the only way to overcome this pandemic.”

The United States has become the epicenter of the pandemic, which has claimed tens of thousands of lives so far and caused economies across the globe to come to a standstill.

So far, Cuba has sent more than 1,455 doctors, nurses, and health professionals to twenty-two countries—including Italy and a number of Latin American countries, such as Honduras—to help contain COVID-19 and treat those who are infected. The Caribbean nation has considerable experience in sending these types of missions to countries throughout the world, especially those dealing with disasters and outbreaks such as the 2005 earthquake in Pakistan, the Indonesian tsunami in 2006, the devastating 2010 earthquake in Haiti, and more recently, the 2014 Ebola epidemic in West Africa.

The new missions, called the Henry Reeve International Medical Brigades, have earned public scorn from U.S. officials. These officials, according to Vidal, have been pressuring other countries to refuse this aid.

“We have evidence that the United States government has directly approached foreign governments to pressure them to suspend their medical cooperation agreements with Cuba and even to not accept the collaboration of Cuban professionals to face the COVID-19 pandemic,” the diplomat says, noting that “the vast majority” of these countries have continued the arrangements with the island’s medical teams.

The United States has referred to these medical brigades as a form of “human trafficking” and accused Havana of stealing the wages of doctors sent abroad. A number of U.S. allies, including Brazilian President Jair Bolsonaro and the post-coup government in Bolivia, have ended the Cuban missions in their respective countries in recent months.

Cuba denies these allegations, saying that doctors are paid their wages either by Cuba or the host country, and pointing to the fact that roughly two dozen missions in poorer nations are provided free of cost.

Agreements with other countries to deploy these medical teams generate between $6.3 and $11 billion annually for the island, but Vidal says “depriving Cuba of economic income” is only one of the reasons the Trump Administration has sought to discredit the island’s efforts.

“[The U.S. government] is also trying to divert attention from its own privatized health system, which is not capable of guaranteeing the health of its population in normal times and even less now in the context of the pandemic,” says Vidal, who is also the director general of the United States division at Cuba’s Ministry of Foreign Affairs.

The U.S. attack on Cuba’s health care programs comes as confirmed COVID-19 cases and deaths in the United States continue to rise, and as health practitioners across the country decry the lack of adequate equipment and supplies in overwhelmed health facilities across the country.

Beyond these shortages, and the fragmented and conflicting responses from authorities in the federal government, the issue of health care access was already a major concern for Americans before the pandemic, with more than 70 million people in the United States having inadequate coverage or no health coverage at all.

Cuba, meanwhile, has been able to contain the spread of the pandemic in the tourist-frequented island, in large part because of its universally accessible health system.

“The Cuban government has mobilized all of its limited resources to provide the necessary care to our people,” Vidal explained. Medical practitioners were mobilized by the government early in the year to undertake door-to-door assessments. Those presenting symptoms were immediately transferred to isolated, specialized health centers to receive treatment.

Cuba’s socialist health system also includes a pharmaceutical industry that has developed ground-breaking medicines, including Recombinant Alpha 2B Interferon antiviral, which has been used to treat coronavirus-infected people. Vidal also explains that clinical trials using a molecule called CIGB 2020 to help improve the body’s immune response in coronavirus-infected patients were taking place, and that a vaccine was being tested.

With significantly fewer resources per capita to spend on health, Cuba has nonetheless been able to demonstrate the validity of some of its basic social principles during this crisis.

Before the pandemic, a growing percentage of the U.S. population was being swayed to the idea of ‘Medicare for All,’ as espoused by Presidential candidate Bernie Sanders and others. This interest has grown in spite of attempts by Republicans and the right wing of the Democratic Party to dismiss the proposal as a form of “communism.”

While Cuba’s medical teams may not arrive in the United States to help stem the rising number of casualties from the virus, the pandemic has revealed how the profit-oriented health system fails to serve people, especially when it is most needed.

“One of the lessons from this pandemic is that, wherever neoliberalism has weakened the state and imposed the privatization of health services, is where they have been least prepared to deal with COVID-19,” Vidal says. “Health should not be a business, and access to medical care is a human right.”