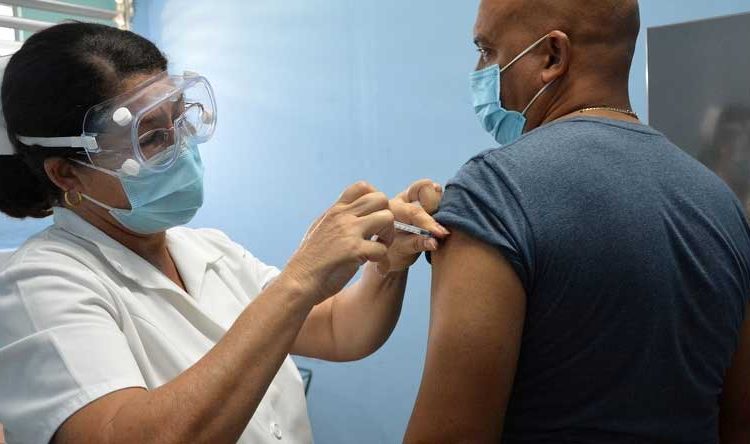 This figure is higher than that established by the World Health Organization (WHO) to consider SARS-CoV-2 immunogens as effective vaccines.

The general director of the Finlay Vaccine Institute (IFV), Vicente Vérez Bencomo, announced this Thursday that Soberana 02, in its three-dose scheme with the Soberana Plus booster, achieved an efficacy of 91.2% against symptomatic disease. This figure is higher than that established by the World Health Organization (WHO) to consider SARS-CoV-2 immunogens as effective vaccines.

The result was announced to Cuban President Miguel Díaz-Canel during the meeting of the Temporary Working Group to confront COVID-19. The president congratulated the scientists and said that this shows the determination in their work in such difficult circumstances.

Vérez Bencomo said that this number is very high and that it is a reflection of 53 weeks of non-stop work.

He further stated that the efficacy of the three-dose scheme was determined in the presence of the Beta variant of SARS-CoV-2, first reported in South Africa, one of the most worrisome ones recognized by the WHO due to its high transmissibility.

“This is a first step and much remains to be done to contain the transmission of the disease, we cannot rest until all Cubans are vaccinated and will surely not die if they become ill,” he said.

On June 19, the IFV reported that in Phase III of clinical trials, the Soberana 02 vaccine candidate, in its two-dose schedule, had demonstrated 62% efficacy, in addition to a confidence interval greater than 40%, also above that required by the WHO (30%).

Soberana 02 is the world’s only conjugated SARS-CoV-2 immunogen. The virus antigen, the receptor-binding domain (RBD), is chemically bound to tetanus toxoid, while Soberana Plus includes two RBDs bound together with aluminum hydroxide and is the only vaccine project that is being studied in the convalescent population.

This last formulation has proven to be a valuable immunity booster, both for people naturally vaccinated with the virus, and for those who received other vaccine candidates, such as Soberana 02.

The IFV specialists have said that it is more advisable to use Soberana Plus, which is less complex but highly immunogenic, as it only includes the protein that the immune system needs to reactivate its memory cells.

Based on these results, the Center for State Control of Medicines, Equipment and Medical Devices will be able to officially register Soberana 02 plus Soberana Plus as a vaccine, issue the emergency use authorization and move towards a future mass vaccination of the Cuban population.

On June 29 Soberana 02 was authorized for emergency use in the Islamic Republic of Iran, granted to the Pasteur Institute of Iran, which will market the vaccine in that country under the name Pasteur as part of a collaboration agreement with the IFV.