The essential 86 years of Stella Calloni 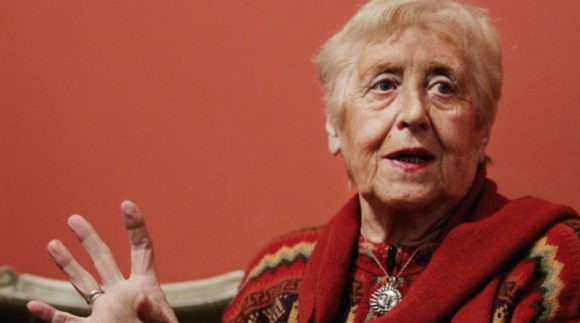 Long ago there was beautiful and good news for the world, but above all for our punished Latin America, and it was your birth, dear Stella. On June 19, 1935, in your native Entre Ríos, you came to us as the daughter of a rural teacher. Apparently, your cradle that was already impregnated with that sacred light of those that – silently – enlighten men and women for their personal emancipation.

Once you told me, with that face of yours always beautiful crossed with marks and flashes of pure rebellion, that you defined yourself as a Christ-Marxist-Peronist. Wonderful syncretism that tells us all of the forces that are conjured in your body and soul, and that they are none other than the purest love for humanity. Revolutionary love lived in each text, harangue or fiery lecture that always pays off with an epic generosity.

Poet of enormous smoothness, but deceptive as fire, which can warm the soul or set cities ablaze. Because that’s you, dear Stella: a velvety but dangerously lurking flame against the evils of this world. Incendiary with injustices, against the powerful and the genocidal. An intense and pure fire ready to explode with your gift of words turned into testimonies and books. In relentless struggle for humanity.

When many years ago, at the height of his deed, Evo Morales told the world that he considered you “his spiritual Mother”, he was just verbalizing the unavoidable essence that flows wherever you go. I was talking about your spirituality, your infinite love of Pachamamesco, a power that even the great protagonists of history recognize and bow down to it. Because there is nothing greater than love. And perhaps nothing greater than the revolutionary love that you give us with such lavishness and hands full. Like when you were raising children in Nicaragua in the midst of the tribulations of the Sandinista Revolution. Fable juggler, giving your love between the bullets.

Your hours with Gadhafi, Yaser Arafat, Commander Hugo Chávez, Salvador Allende and many others, were infecting you with a primordial greatness that you knew how to turn into imperishable books for fighters around the world, present and future . The investigations of 1999, 2006 and 2015 on the Condor Plan are now eternal gospels to understand the imperialist horror over our peoples. Your thousand articles always clear, without deviations from the ideal and corrosive to the marrow, were my guide on countless occasions to give birth to other texts – infinitely more humble – that followed your path.

And it is enough to see the immense Fidel by your side in endearing photographs full of a fraternal complicity, typical of those who walk the same cornices and the same trenches, to understand that you have lived and live among giants as one more.

So today, on this new birthday, dear Stella, I want to pay you my little tribute full of gratitude and admiration for having made me better so many times and honoring me with your love. Precious gem that the militancy gave me undeservedly. Tribute that – I am sure – each comrade and comrade of the REDH will allow me to extend it, because no one doubts your revolutionary integrity and your instructive charisms.

And sorry for so much sincerity.