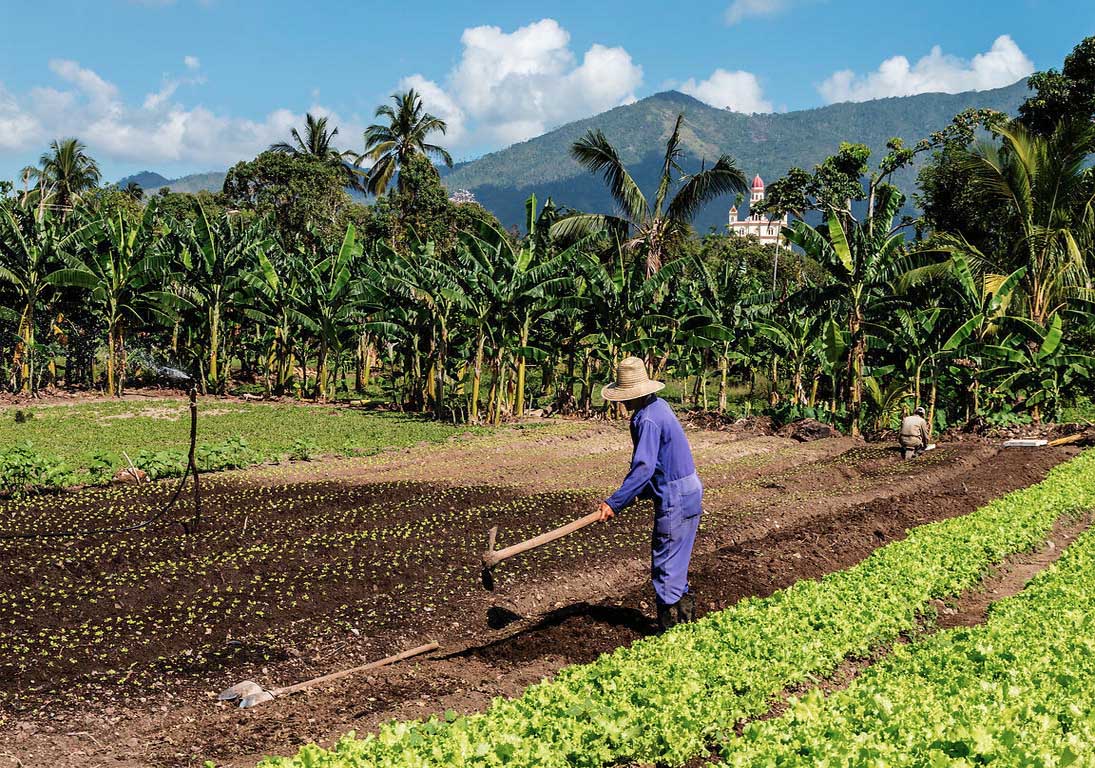 Ciaran Harris writes about the case of sustainable agriculture in Cuba and how the initiative is spearheading global ecological conservation.

Industrial “conventional agriculture” is the primary driver of many environmental problems we face today. The increasing scale of farms destroys semi-natural habitats, such as hedgerows, which are required for healthy insect populations which pollinate our food and control harmful pests.

Vast fields of a single crop (monocultures) and simple crop rotations are perfect conditions for the spread of pests and diseases. High chemical fertiliser input contaminates groundwater and rivers, and excessive pesticide use poisons invertebrates and farmland birds.

As we see in other industries, the drive for profit maximisation leads to the intensification, simplification and scaling up of farming. Far from being the result of the incompetence of individual farmers or policy makers, these issues are rooted in the accumulation and concentration of capital.

In contrast to conventional agriculture, “sustainable alternative agriculture” takes advantage of existing natural resources and processes in order to drastically reduce or eliminate the need for external inputs such as pesticides, herbicides and inorganic fertiliser. For example, natural enemies such as parasitic wasps can be used to control pests instead of using chemical pesticides.

Crop rotations can be used to maintain soil health and supress the spread of weeds, rather than using chemical fertiliser and herbicides. Reducing the size of farms creates varied landscapes with a greater variety of habitats, providing food, nesting sites and other resources for insects and birds.

By creating more self-contained systems, agriculture becomes more sustainable because it does not undermine the ecological processes which sustain it [1].

The logic of capitalism and the entrenched interest of multinational corporations hinders any significant shift in a sustainable direction.

Since the 1990’s, Cuba has implemented a rapid and widespread shift to alternative sustainable agriculture, contributing to food sovereignty and environmental sustainability. The island nation now has pollution-free rivers and is the most sustainably developed country on the planet.

So how has Cuba changed its farming? And how has the country’s socialist system permitted such a rapid reshaping of the country’s relationship with nature?

Prior to Cuba’s sustainable shift in the 1990’s, agriculture followed the worldwide trend of mechanisation, replacement of local practices with applications of scientific research, and replacement of small farms with large monocultures.

In Cuba this trend began with the separation of the indigenous population from their land through Spanish colonialism. Sophisticated local practices were replaced with plantations, and imported and indigenous slave labour was used to produce tobacco and sugarcane for European markets.

Following the Spanish-American war, the US inherited dominance over the sugar industry, Cuba’s principle agricultural export. Controlling such an important industry gave the superpower huge control over Cuba’s economy.

By the early 20th century nearly all US holdings in the country were sugar-based, including land and sugar processing facilities. This drove huge inequality in land ownership, with 9% of farmers owning 70% of the land.

The seasonal nature of sugar production further entrenched inequality, poverty and hunger among rural workers. The harvest season was intense and backbreaking, while for the remaining 7 months workers were unemployed [4].

After the Cuban revolution in 1959, initial goals of diversification away from sugar was hindered by the challenges of building a socialist system in the shadow of the US.

In 1961 the Trade Embargo Act was passed, banning all Cuban exports to the US. In response, Cuba entered a reciprocal relationship with the USSR and the socialist bloc, supplying sugarcane in exchange for oil, staple foods, and manufactured goods.

While this was far from the extractive relationship of Cuba’s previous subjugation to the US, to maintain high yields for trade conventional agricultural practices were maintained, including monocultures, high inputs such as fertiliser and pesticides, and mechanisation [4].

Further, ecology was not an immediate priority of the government as extreme poverty, water and sanitation, housing and literacy had to be prioritised [5].

Despite the continuation of a conventional agricultural model, the environment was far from neglected.

From the 1960s the government implemented reforestation programmes, rotational grazing, digging of reservoirs and immunization campaigns.

The dangers of high chemical use were acknowledged, albeit mainly in the form of protections for agricultural workers.

Eradication of illiteracy within three years laid the foundations for deepening ecological consciousness, especially with the arrival of Rachel Carlson’s 1962 book “Silent Spring”, which brought attention to the damage conventional agriculture inflicted on the environment.

The abolition of legal racism and promotion of women’s rights allowed the talents of everyone to flourish, widening the pool of potential scientists [5]. Women now make up two thirds of the positions in Cuba’s science and technology sector, with many in leadership positions.

However, the vulnerabilities of a farming system reliant on imported inputs was made acute with the disintegration of the USSR and socialist bloc in 1989.

The loss of favourable trade relationships and the tightening of the US blockade caused an 80% drop in pesticide and fertiliser imports, with similar declines in machinery parts and fuel. Isolation left Cuba vulnerable to continued economic warfare from the US.

The Mack Amendment, passed in 1992, banned all trade with Cuba by U.S. subsidiaries. Medicinal and food items were also prevented from being imported. GDP dropped by 35%, imports by 75%, and average caloric intake dropped by 30% [7].

The government implemented the most rapid and widespread shift to sustainable agriculture in history, with Castro calling on agronomists to “produce more food without feedstock, fertilizers or fuel” [8].

Alternative agriculture relies on the knowledge of farmers and their ability to utilise the existing resources and processes, rather than using external inputs and other intensive methods.

As every ecosystem has its own composition of pests, diseases, pollinators, soil type, and climate, no single configuration of technologies or techniques can be applied to all farms.

The Cuban government therefore created space for experimentation and application of both scientific and local knowledge.

Over 100,000 predominantly state-run farms were redistributed to small farmers. Management responsibilities were decentralised, and many farms became managed by those who worked them.

In doing so the size of farming units were decreased, permitting a more intimate knowledge of the local conditions to develop [5]. As the old saying goes, “the best fertiliser is the farmers footprint”.

Local research stations were also established, allowing farmers and scientists to interact as equals. Intimate knowledge and local practices from the farmers can be integrated with the more general and abstract knowledge of agronomists and ecologists.

Research and solutions to agricultural problems are overseen by the Ministry of Agriculture and national network of regional research labs, regional plant protection stations, diagnostic labs and centres for production of biological control agents.

Local research stations are staffed by people with varying qualifications, often located on cooperative farms and operated by their members [4].

With the loss of chemical pesticides farmers had to use natural enemies of pests such as parasitic wasps, parasitic flies, predatory ants, fungus and bacteria which attack problem pests.

The local centres monitor the prevalence and spread of crop pests and diseases, advising local farmers of likely problems. They also breed and produce natural enemies adapted to the local conditions and are available to members of the farming cooperative for free or sold to non-members.

Research centres monitor the distribution of weeds and develop models to predict their spread. Farmers are then advised to plant crops which are highly competitive against the likely weed. Competitive crops outcompete the problem weed for resources and can almost completely supress the problem weeds the following year [4].

Loss of fertilisers meant alternative methods had to be employed to maintain soil fertility. This is a particularly big problem for Cuba due to the island’s long and thin shape, which causes problems with soil salinity.

Legumes; plants able to convert atmospheric nitrogen into forms which can be used by crops for growth, are incorporated into crop rotations to maintain soil health.

Most famously is Cuba’s use of earthworms to produce organic fertiliser, usually from agricultural waste products such as cachaça from sugar cane.

Cuba’s biggest worm farm is in Pina Del Río, which produces an estimated 100,000 tonnes of earthworm humus per year [9].

A major problem of conventional agriculture is the spatial separation of crops, livestock and the humans that eat them. This means animal feed must be transported to where the livestock are reared, and food must be shipped to where the consuming population are.

This requires use of fossil fuels and disrupts nutrient cycles due to the long distances between where the food is produced and where it’s consumed. Due to the fuel shortage, Cuba reintegrated crop, animals and humans to reduce need for long distance transport and allow soil to replenish through nearby nutrient sources.

Rather than using artificial fertiliser or transport manure from far away, livestock are reintegrated with crops and produce manure on-site. This decreases the need for fossils fuels used and reduces associated greenhouse gases emissions [10].

Cuba also has a thriving urban agricultural movement led by people who previously had little experience in food production. This helps to increase food production for urban communities, reducing the need for scarce fossil fuels for transport.

The movement is also supported by the government, with the relaxation of regulations in the 1990’s allowing cultivation of yards, balconies and rooftops.

The Urban Agriculture Department was established in 1994, which prioritised getting land to residents who wanted to grow food. City laws allow unused land to be allocated to food production, helping to turn vacant land into productive gardens.

Many claim the environmental achievements of Cuba arose purely due to necessity, simply to cope with the challenge of avoiding hunger with little access to conventional equipment and inputs.

While the loss of inputs exposed the weaknesses of conventional farming, the preconditions of the success of Cuban science began with mass literacy campaigns, expansion of education, and socialist economic system.

Science in Cuba fundamentally differs from that in capitalist countries because it is publicly owned and incorporated into the national plan.

In contrast, the research pursued under capitalist systems are often determined not by what society needs, but by whether the knowledge can be commodified. Conventional industrial agriculture continues to dominate research funding despite being a driver of environmental issues such as climate change, water pollution, and pollinator decline.

The economic logic of capitalism prevents any significant implementation of sustainable farming, as short-term profits and the interests of agribusiness take precedent over any other considerations.

The success of Cuban science is personified by the island’s sustainable development, world class healthcare system, medical internationalism, and world leading biotechnology industry. Cuba only has 2% of South America’s population, but 11% of its scientists [11].

In Cuba there are no organisations committed to undermining research in the name of profit such as lobby groups, think tanks and PR firms. Cuba offers a window into how socialism can reshape our relationship with nature, when the land, labour, resources and research are no longer bound by the narrow needs of capital accumulation.

Ciaran Harris, is a member of the YCL’s Brighton & Hove district

[9] Alves, A. and Nenevé, M., 2019. Agroecology, the Interaction between Agriculture and Environment: An Example from Cuba. International Journal of Advanced Engineering Research and Science, 6(10).