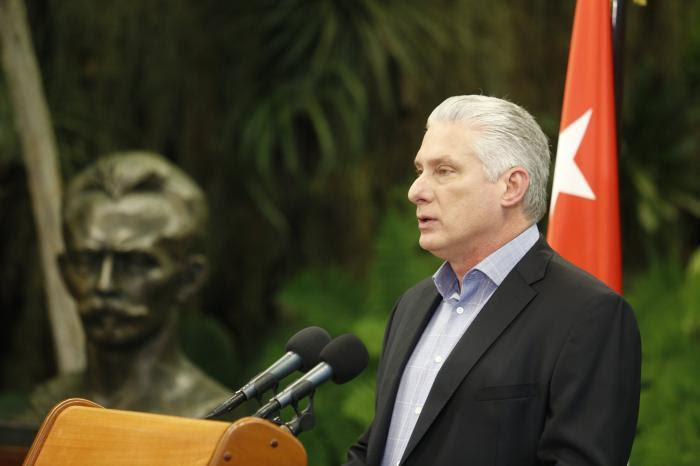 Cuba changed, Our America is changing, but the empire doses not change

Allow me to begin with words that were told more than one century ago:

“When a strong nation wants to fight a battle with another, it demands allegiance and service from those nations dependent upon it. The first thing a nation does to dominate another is to separate it from other nations.”

This was written by Jose Marti 130 years ago after attending the Monetary Conference, a feast purposely designed by a burgeoning United States for the young republics of Our America.

Martí, who had been accredited by the government of Uruguay, o behalf of which he had been acting as Consul General in New York since 1887, apparently was almost excluded based on unexplainable delays and deceitful excuses by the State Department.

That Conference failed and it is affirmed that the Cuban decisively contributed to that, for he later on wrote a profound and demolishing analysis dictated by his own conscience on the dangers Our America would be exposed to should it accept the monetary union.

In forthright terms, without euphemisms of any sort, Martí defined in those lines the inability of the United States to understand it southern neighbors.  And I quote: “They believe in the incomparable superiority of ‘the Anglo-Saxon race over the Latin’.  They believe in the inferiority of the Blacks, whom they enslaved yesterday and vex today; and of the Indians, whom they are exterminating.  They believe that the Spanish American nations are made up principally of Indians and Blacks.

Few texts are more visionary on the US policy towards our nations in the Americas, a policy that the unlimited ambition of the empire has frozen in time, when it refused to listen to the voices that yield to it.

Those who may doubt it can compare those words with the exclusionary conception of the Ninth Summit of the America and they will realize they are still absolute valid.
The philosophical dogma that has always accompanied that insatiable ambition is the so called Manifest Destiny, a deeply-rooted racist and supremacist belief whose leading concept relies on the interventionist and unacceptable Monroe Doctrine.

Without renouncing any of these two concepts, the US Government convened the Ninth Hemispheric Summit in the city of Los Angeles, with discriminatory attendance and insufficient regional representation.

In the case of Cuba, the exclusion was not only against the government, but also against the representatives of the civil society and social actors, including our youths.  The United States is no longer satisfied with deciding who and how should be the Cuban government.  Now they attempt to determine who the representatives of the civil society are; who are the legitimate social actors and who are not.

Allow me to revisit history, for it usually hides so many lessons.
Between January and February of 1928, Cuba hosted the Sixth Pan-American Conference, one of the bad seeds of the OAS and the current summits of the Americas. The president of the Island at that moment was Gerardo Machado, a henchman of sad memory who was defeated by a popular uprising in 1933.

There can be no serious historian ignoring that “Cuba’s election as the venue of that conference was a result of the status of subordination of the Island to the United States. We were a protectorate of the Yankees.  Thus, invitations not even were sent from Havana. They were distributed by the then Chargé d’affaires of Cuba in Washington.

Despite that subordination that Machado and his team decorated with fervent acts of genuflection, the then president of the United States, Calvin Coolidge, arrived on board of a warship and the photos taken at that time show him, accompanied by his wife, not by the side of his Cuban counterpart, but a few meters ahead of him.
The order given by the owners of the “backyard” to those responsible for the Cuba policy was to avoid any uncomfortable debate. The recent interventions in Haiti and Nicaragua had heated the atmosphere, so it was necessary to avoid the discussions that might happen to be disturbing for the imperial ears.
Some people say that, on a previous trip to the United States, and for the purpose of being chosen as the host, Machado had promised Coolidge to avoid any statement or denunciation and offer the most servile support to the North Americans.
The Cuban ambassador in Washington had the despicable honor to please the powerful visitor by singing praises to the intervention, something that is still an insult:
“We cannot join the general choir saying ‘no intervention’ –he said- because the word ‘intervention’ in my country has been a word of glory, a word of honor, a word of triumph.  It has been a word of freedom; it has been the independence.”
The organizers of the Summit of the Americas of 2022 would gladly invite a government like the one that received Coolidge, as was done 94 years ago with the undisputed dictator Gerardo Machado, who was defeated five years later by the Revolution of 1933.
But that was the Cuba that disappeared forever from the map of political subordination with the triumph of the Revolution of 1959.
I refer you to the historical speech delivered by the Army General and Leader of the Cuban Revolution at the Summit of the Americas held in Panama in 2015.  With the whole time taken from us to take the floor at former Summits, Raúl laid down the principles that would ensure a more fruitful relation between the two Americas. And I quote:
“Hemispheric relations, in my opinion, must change profoundly, in particular in the political, economic and cultural spheres, to focus on developing  mutually beneficial ties  and cooperation to serve the interests of all our nations and their stated objectives, in accordance with International Law and respect for  the exercise of self-determination and sovereign equality”. End of quote. 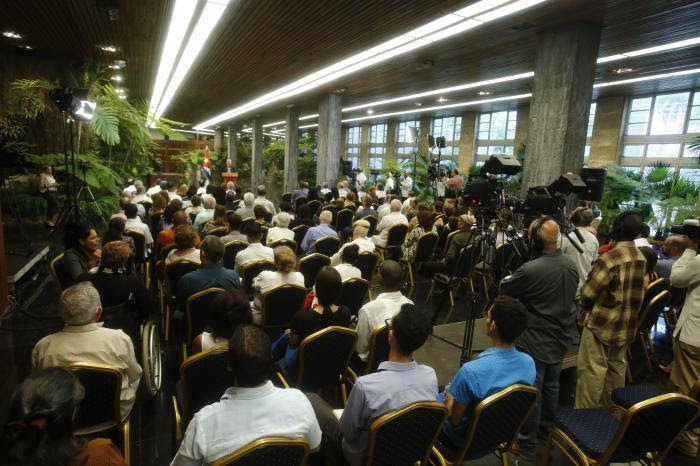 Photo: Cubaminrex
Cuba changed, Our America is changing, but the empire doses not change.
Regarding the exclusionary and discriminatory character of the event to be held on June 8 to 10 in Los Angeles, the revolutionary government made a strong statement.
We have known of the rejection provoked by that opportunistic selectivity in most of the governments of the region, as well as the clear and firm position adopted by several of them; and the notable absences to the event, as an expression of rejection of exclusions.
These confrontations between interventionist policies and sovereign policies have also historical antecedents.
In 1994, when the government of the United States convened the first of these summits and excluded Cuba, Commander in Chief Fidel Castro Ruz summarized in a phrase the essence of the imperial arrogance in a single phrase: “How much cowardice, mediocrity and political weakness is truly reflected by this exclusion!”. End of quote.
The US government of the moment, living through the euphoria of the alleged end of the Cold War, tried to use our most cherished symbols to lure again the nations of America into an already forgotten recolonization project; the FTAA.
And it dared to describe the Summit of the Americas as “Simon Bolivar’s dream come true”. “They just forgot to say it was also Marti’s dream come true”, answered Fidel from a historical meeting held at the Main Hall of the University of Havana where for the first time he coincided with the young and already impressive Bolivarian politician Hugo Chávez.
Hardly 11 years later, in another historical event that exalted the Summit of the Peoples over the Summit of Heads of States, where he cried his well-remember phrase “The hell with the FTAA…!” in Mar del Plata, Hugo Chávez had written the epitaph of the project to re-colonize Our America. The dreams of Bolivar and Marti were becoming true.
The list of the excluded was drafted against this Latin America that calls things by their names and asks no permission to exercise its sovereign rights.
We are honored to head that list, together with the leaders from Venezuela and Nicaragua and you, who are genuine representatives of our people. We feel equally honored by the gallant solidarity by Andrés Manuel López Obrador, Lucho Arce, Xiomara Castro, the Caribbean leaders who have emphatically rejected exclusions and others who will certainly do it during the Summit.
Within a few hours we will be able to confirm what will be achieved or what proposals will be made in Los Angeles beyond the inaugural fanfare and the photo of the hosting President with those who will attend.  The media show intended for the US domestic politicking will not be able to hide  the lack of true interest on the part of  that government in attending to the most pressing and serious problems of the peoples of Latin America and the Caribbean.
You may well check the official documents and statements by politicians and officials from the US government during the last few years. The scarce references to our part of the world reflect the profound misunderstanding of the current realities of a region that has its own identity, whose nations have accumulated cravings for justice, suffer from underdevelopment and increasing inequality and refuse to bear for any longer the continued plundering of their natural wealth and the increased exploitation of their workers.
Neither do they bear pressure nor interference by the United States, which are aimed at forcing sovereign governments to implement policies that benefit the great transnationals, in an attempt to demand obedience and impose punishments when they fail to succeed. They refuse the role played by the institutions created by the United States, such as the OAS and the rest of the hemispheric domination instruments.
None of the above appears on the agenda of the meeting in Los Angeles.
The regional migration issue is inextricably linked to development and, above all, with underdevelopment. It is closely linked to the global capitalist model and the advancement of neoliberalism, whose economic policies create more marginalization, social instability, and unemployment, lack of health services, unaffordable and insufficient education systems and disintegration of the social fabric of communities.
Growing sectors of the population will keep on looking for the satisfactions of their needs and the realization of their dreams of prosperity I the advanced economies of the North. The present reality confirms the old idea that, if development does not start once and for all to spill over the South, underdevelopment will advance at greater speed to the North.
Repressive formulas as those outlined in the document imposed by the United States for the meeting are not the answer.  They might temporarily mitigate uncontrolled migration, but they will not solve the multiplicity of causes and conditions that provoke irregular migration.
In the case of Cuba, the US government has applied for four years a policy oriented to encouraging irregular migration.  As a rule it accepts those who arrive in its borders by irregular means and grants them the privilege of obtaining a permanent residence by virtue of legally established formulas only applicable to Cubans; it shut down the legal ways to migrate and maintains a policy of economic warfare aimed at undermining the living standards of the people. This is what can be called a perfect recipe to encourage irregular migration. 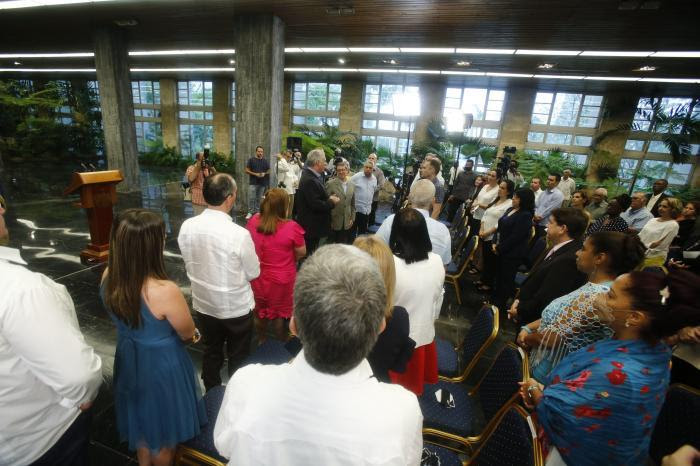