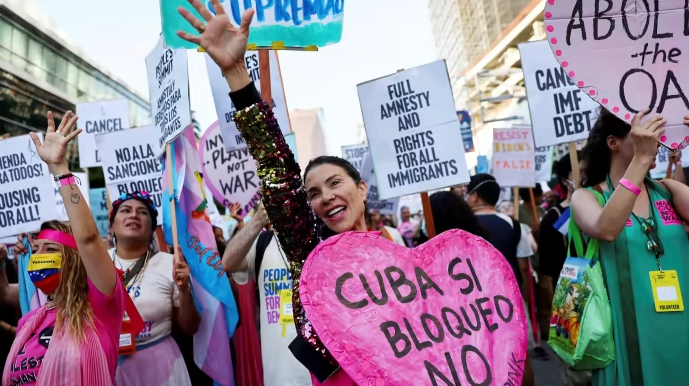 At last week’s conference in LA, the real activity was outside on the streets

GIDEON LONG
The more political summits I attend, the more convinced I am that the best place to be when covering them is not inside in the conference halls, but outside on the streets.
Last week’s Summit of the Americas was no exception.
The gathering of leaders from across the Americas is held every three or four years. This year, it took place in the cavernous Los Angeles Convention Center, among the eclectic jumble of residential and commercial buildings that makes up downtown LA. The venue was largely empty. Many people who had initially planned to attend — policymakers, journalists, even presidents — skipped it, figuring they could just as easily follow events online, and that it would probably yield very little anyway. They were mostly right.
Of the Americas’ 35 presidents and prime ministers, a third were absent. Three did not receive an invite: Cuba’s Miguel Díaz-Canel, Nicaragua’s Daniel Ortega and Venezuela’s Nicolás Maduro were declared personae non gratae by a US government that regards them as dictators.
Some Latin American leaders, including Mexico’s Andrés Manuel López Obrador, stayed away in protest at that decision. The presidents of El Salvador and Guatemala missed it for other reasons. Uruguay’s president was out of action with Covid.
It all made for a subdued event. There was an agreement to tackle immigration and combat climate change in the Caribbean, but very little in the way of major initiatives to bolster the economies of hard-pressed Latin American nations.
Outside the building, however, things were more heated.
As delegates arrived at the Microsoft Theatre for the opening ceremony, they were confronted by a small but noisy group of Latin Americans with grievances to air. Maggie, a Mexican migrant, held up a placard in homage to her country’s president, known almost universally by his initials, AMLO. “AMLO No Estas Solo” (AMLO you’re not alone), it read.
“I’m proud of him for saying that the other nations, the Cubans, the Nicaraguans, the Venezuelans, should be invited,” Maggie said. “It’s not fair that some nations are invited and some aren’t. We’re all Americans.”
Meanwhile Alex Henríquez, a 55-year-old El Salvadoran migrant, held aloft a photo of his brother. “Bukele is holding my brother prisoner” read the words printed on his placard — a reference to the Central American country’s authoritarian leader Nayib Bukele.

“The government accuses my brother of collaborating with criminal gangs,” Henríquez told me. “It’s rubbish, he’s innocent! He sells tomatoes and onions in a local market! I have no problem with Bukele putting gang members in jail, but he’s jailing innocent people too.”

Elsewhere Honduran migrants demanded the right to remain in the US, and Nicaraguans protested against Ortega. There were also Guatemalans, Colombians and Panamanians, all trying to make their voices heard.
Directly outside the venue, two Ethiopian-American women held up a huge black and yellow banner, billowing in the West Coast breeze. “500 Days Of #Tigray Genocide” read the poster, in reference to the conflict in northern Ethiopia.
It’s easy to be cynical about these big set-piece political summits, with their bland, carefully worded closing statements and promises of action that invariably come to nothing. It’s easy to forget that behind the scenes, delegates and diplomats work hard to reach agreement on complex issues — and that they sometimes succeed. At the LA summit, 20 countries signed a joint declaration on how to tackle migration, one of the hemisphere’s pressing issues.
But still, this gathering — more than most — raised the question of how useful such meetings are, and whether they are worth the time and expense. The Los Angeles Police Department said last month it expected to spend nearly $16mn on policing it. Add on the cost of hotels, flights and staging, and the bill runs to many millions more.

“I’d like to think all the cash spent on bringing these leaders here from around the Americas was worth it and that one day we’ll see the benefits of these announcements they’ve made,” said Gloria, a 36-year-old Mexican migrant protesting outside the centre. “But I’ll be honest — I have my doubts.”