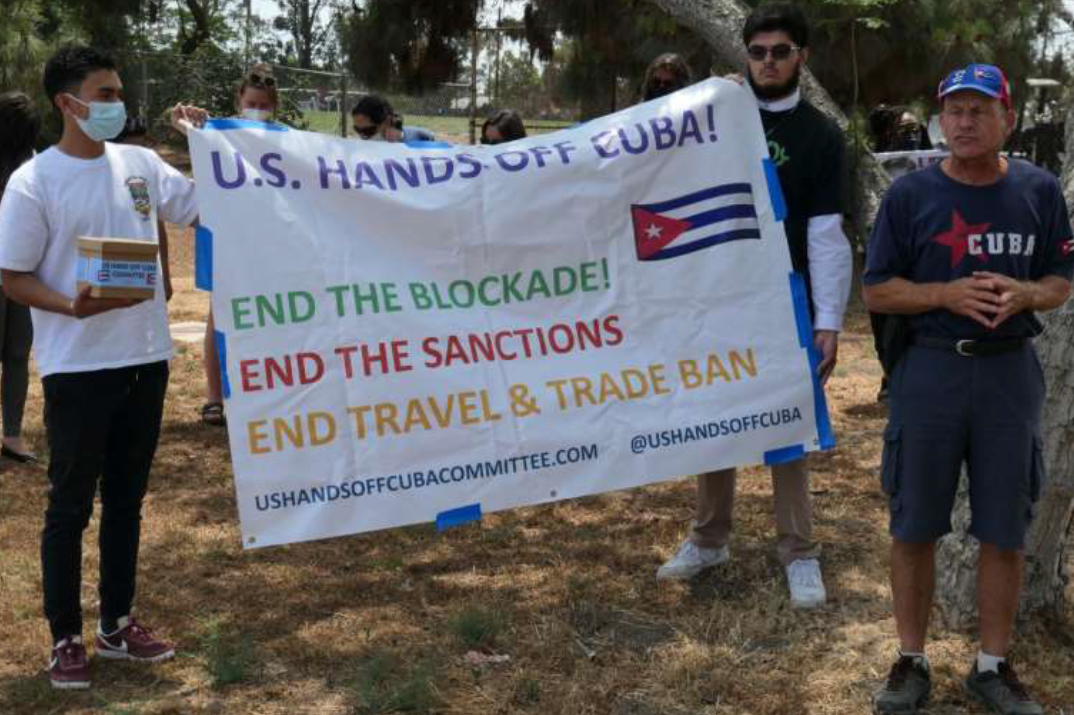 A group of Angelinos of Cuban origin has organized to demand an end to the US blockade of Cuba and to defend Cuban sovereignty to decide its future. With the slogan “Say no to ‘the campaign of destabilization #SOSCuba’ and to the calls for a U.S. military invasion, a demonstration was held in Los Angeles over the weekend.
“I want to make it very clear that I do not support the Cuban government, but I do support the end of the US embargo, which next year is going to turn 60 years old and has imposed a lot of suffering on the people,” said Luis Herrera, born in New York but of Cuban-Peruvian origin.

A few years ago he had the opportunity to go and meet his family in Cuba. “It was difficult because you see both sides of the coin, the sufferings of the people imposed by their own government, but also the consequences of the embargo,” Herrera said he doesn’t think many Americans know that there has been a U.S. embargo against Cuba since the Cold War era that impacts Cubans. “They need to know what the government is doing on their behalf in other countries, in this case in Cuba, and there is a lot of damage done to Cubans.”

They are asking President Biden to end Cuba against the bloc. He recalled that Trump imposed more restrictions: If a Cuban wants to apply for a visa to go to that country, they can not get it at the U.S. Embassy in Havana, has to go to Georgetown, Guyana and there are no direct flights. “They have to connect to Russia, Turkey, Panama, and in some cases Dubai.” And those tickets cost between $6,000 or $7,000. “Of course, Cubans don’t have that money. The average worker earns $20 a month. And they depend on their family and friends in America.” He said that the situation of the Cuban people cannot be attributed to their government alone, but is largely caused by the US
blockade.

“The embargo is a business. When I lived in Houston, my cousin in Cuba had a baby and I wanted to send him clothes. I could not send things by parcel but had to resort to an organization of Cubans. They in Houston sent it to a person in Miami who from there traveled to Cuba to take my package. It cost me $400 shipping. If the embargo wasn’t in, I would have easily gone to UPS, the postal mail, FedEx or DHL to send my gift, and I wouldn’t have paid as much.”
And he explained that when you go to the different cities of Florida, there are many businesses that offer services of sending money, clothes, and whatever you want to Cuba. “People are making money from the embargo. That’s why Cuban Americans in Florida will never recognize the damage done and will always blame the Cuban government, and they are right, but the embargo does not help; and so to speak, they consider you a communist.”

In the end, we have to accept what the Cubans decide, if they want to live in socialism, we must respect their determination. “Of course, the Cubans in Miami are not going to agree. And its mayor has already asked for the intervention of the United States to go and invade Cuba.”
Herrera criticized that Senator Marco Rubio has never set foot in Cuba or Texas Senator Ted Cruz. “They must go and talk to the Cubans and know their wishes.”

Is there any hope that the blockade will be lifted under Biden’s presidency? “I voted for him because I didn’t like Trump. But when Biden became president, he said Cuba was not a priority for his administration. What are you talking about? To end the embargo, congressional action is needed, but it can issue an executive order to make it easier for Cubans to obtain a visa in Havana and return to Obama’s policies.”

Disillusioned with Biden’s stance toward Cuba, Herrera revealed that he has thought about signing up as a Democrat and registering as an independent. “It is a disgrace that the United States is imposing drastic measures on a poor country. People are not treated like that.”

Cuban Americans in Los Angeles are organizing to call for an end to the embargo against Cuba. (Courtesy)
Antonio Mendoza, of Cuban parents, based in Los Angeles, is in favor of lifting the embargo against Cuba. “People could have more access to food, syringes, medicine. You could do business and trade. That would change the situation, and we had already started to see it with Obama.”
Duane Fernandez said many lies have been told about the situation in Cuba on social media and cited some:
– On Facebook, they used the return of Cuban doctors in a Mexican air force plane to try to create the idea that troops were coming.
– On Twitter, they have posted images of evictions from polling stations in Catalonia as if they had happened in Cuba recently.
– On Facebook, several social media users are becoming real fake news machines against Cuba. A photo of protests in Cuba
has been released when in fact they were riots in London before the Euro 2020 final.
– On Twitter, they use a photo that is not of the July 11 protests in Cuba, but of the demonstrations in Madrid in 2012 supporting coal mining.

Fernandez acknowledged that the protests would not have happened without shortages of food and medicine. “It is true that there has been carelessness in Cuba, but it is also true that Biden has already spent $200 million to destabilize the island. They have an army of people who earn their daily bread, spending the whole day on the networks, shouting against injustices and never talking about the economic blockade.” And it’s fine if the U.S. doesn’t want to trade with Cuba, but why apply sanctions to other nations, business companies, banks, officials, and individuals for making deals with the Cuban government.

On July 25, more than 50,000 signatures were delivered to Biden demanding an end to the blockade and economic sanctions.