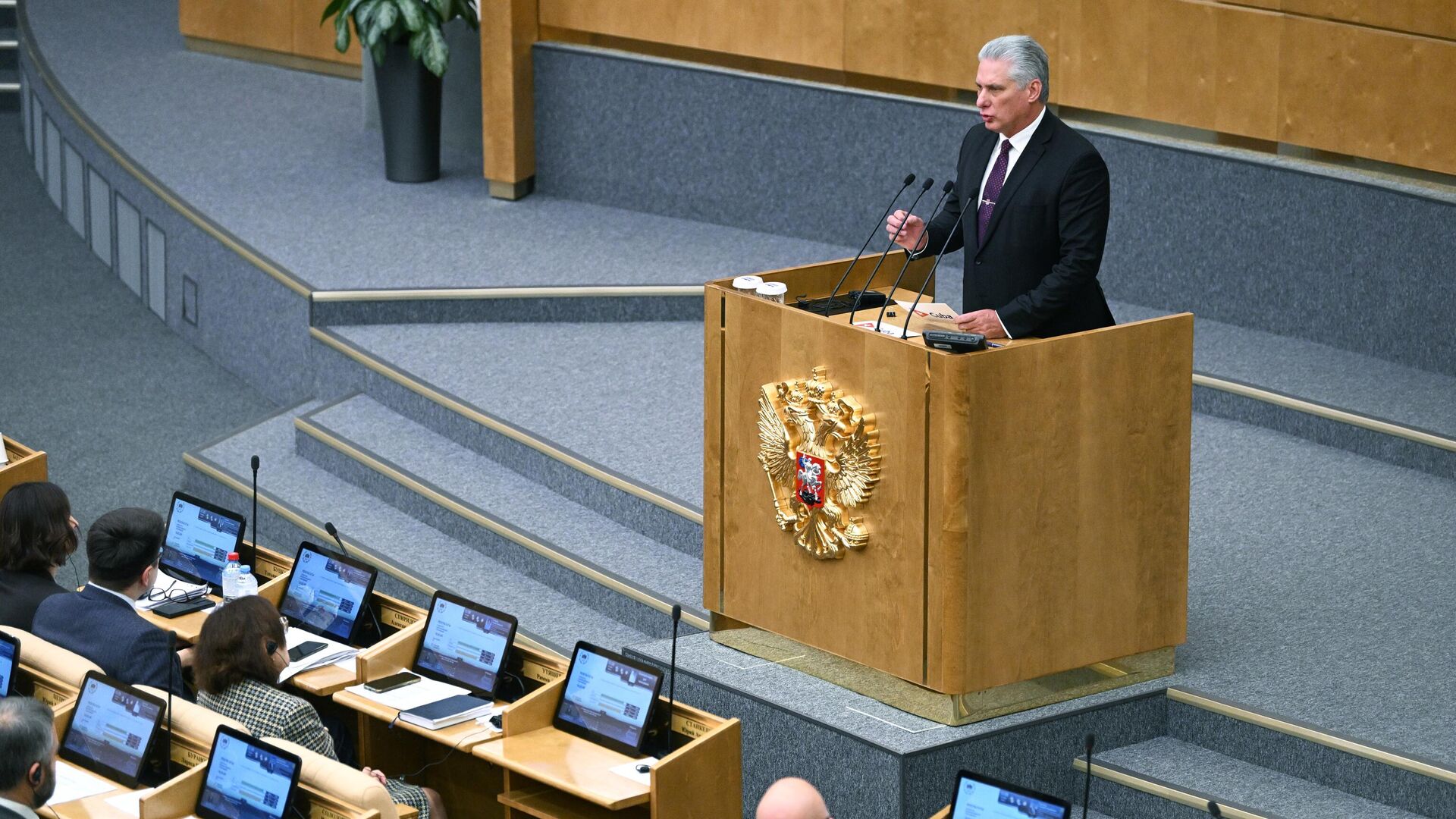 Speech delivered by Miguel Mario Díaz-Canel Bermúdez, First Secretary of the Central Committee of the Communist Party of Cuba and President of the Republic, in the State Duma of the Federal Assembly of the Russian Federation, on November 22, 2022, “Year 64 of the Revolution”.

“Cuba strongly condemns the sanctions that are imposed today unilaterally and unfairly on the Russian Federation. The causes of the current conflict in this area must be found in the aggressive policy of the United States and in the expansion of NATO towards Russia’s borders, which Cuba has systematically denounced in international forums. Cuba, as it has expressed on many occasions, is in favor of a negotiated solution to the current conflict.”

Dear Mr. Volodin, Chairman of the State Duma of the Federal Assembly of the Russian Federation;

Dear Comrade Melnikov, First Deputy Chairman of the State Duma of the Federal Assembly of the Russian Federation;

Dear and dear deputies and deputies:

Thank you for that warmth that friendly arms always have and for the opportunity that you give me to speak before the plenary of the State Duma, for which we thank you (Applause).

On behalf of the people and the Government of the Republic of Cuba, I convey the most cordial and affectionate greetings to all the deputies of this legislature (Applause).

Parliamentary relations between Russia and Cuba constitute an important pillar of bilateral ties and a key piece for the promotion and development of our economic, commercial, financial and cooperation ties.

In recent years, these relations have deepened remarkably, the exchange between our delegations has grown, even despite the COVID-19 pandemic.

Our people sincerely appreciate the resolution that this legislative body has approved annually for more than 25 years, demanding an end to the policy of economic, commercial and financial blockade that the Government of the United States of America has imposed on Cuba for more than 60 years. We appreciate that gesture and value it very much.

The economic situation in Cuba is complex at the present time due to a group of fundamentally external factors. In the first place, the intensification of the economic, commercial and financial blockade of the United States in a way that is unprecedented in the history of this cruel and genocidal policy.

Since 2019, the former president of the United States, Donald Trump, applied 243 measures that have affected the main sectors of the economy that pay taxes to the National Economic and Social Development Plan until 2030. The current Government of President Biden maintains the vast majority of these in force.

To this is added the economic impact of COVID-19, especially for international tourism, the main source of income for the island, as well as the effects of climate change and the current global crisis.

In these difficult circumstances, Cuba has the support and understanding of its closest friends, including the Russian Federation and, of course, the deputies of this legislative body who can play a fundamental role in promoting important projects in the economic sphere (Applause).

Political relations between the Russian Federation and Cuba are excellent, there are broad coincidences on the main issues on the international agenda and decisive cooperation in international bodies; However, the full development of our economic, commercial, financial and cooperation ties is still pending to bring them to the same level that political relations have today, and that must be a priority. It is a task for both legislative bodies to work in this direction.

I want to highlight, from the feelings of gratitude of the Cuban people, that in the midst of the difficult circumstances of today’s world and the complex situation that both the Russian Federation and the Republic of Cuba are experiencing, due to the sustained increase in unfair sanctions for part of the imperialist powers against our two nations, there is a whole group of exchanges and mutual cooperation projects that were successfully developed at this stage; among them, the successes of a Russian company in terms of geological prospecting and work with oil in the Boca de Jaruco wells, where new technologies have been applied and there is an increase in production and yields.

An investment from a Russian company was also opened in the Mariel Special Development Zone for the diagnosis and repair of the Kamaz technologies that exist in our country.

Work has been underway, with support from the Russian Federation, on the modernization project for an important steel plant in Cuba, La Antillana de Acero, and we expect to conclude the first phase of this project in the coming months, which has to do with the modernization of its steel mill.

On the other hand, the modernization works of the Villa Clara mechanical plant, another important steel development company in our country, have been completed.

We have had the support of humanitarian aid from the Russian Federation in various complex moments for our country, such as the incidents of the Saratoga hotel explosion, the fire at the Supertanker Base in Matanzas Bay, Hurricane Ian, and also in the pandemic peaks we are facing during COVID-19.

The facilities that the Russian Government has created by granting scholarships for university and postgraduate studies to a group of Cuban professionals are working very effectively, and their potentialities are expanding.

On the other hand, there was an important presence of the Russian business community, which we corroborated with the Ambassador in Cuba when we inaugurated, before leaving for this tour, the Russian Federation pavilion at the Havana International Fair.

We have also received support with locomotives for the Cuban railway; We have received a lot of support when we have requested fuel to face the energy situation in our country.

I also want to highlight a particular episode that we had to face in Cuba during COVID-19, and if it had not been for the effort, understanding and support of the Russian Federation we would have had many difficulties, it is precisely when in the midst of from the pandemic peak with the Delta strain we had a defect in our oxygen production plant. At that time, our intensive care rooms had a large number of patients who needed oxygen supply, and in the face of this stoppage, our reserves were practically depleted because the levels of oxygen consumption had increased. We made a request for support to the Government of the Russian Federation, which immediately responded with a plane loaded with oxygen containers that arrived in Cuba. Later that plane,

This is a gesture that we will never forget, because it is help that is given from understanding, from solidarity, from a deep humanist conviction and at a difficult time. Only true friends do that (Applause).

Cuba strongly condemns the sanctions that are imposed today unilaterally and unfairly on the Russian Federation. The causes of the current conflict in this area must be found in the aggressive policy of the United States and in the expansion of NATO towards Russia’s borders, which Cuba has systematically denounced in international forums. Cuba, as it has expressed on many occasions, is in favor of a negotiated solution to the current conflict.

Finally, I want to take this opportunity to thank the heroic Russian people and Government for the gesture of dedicating a square in this memorable city of Moscow to place a monument dedicated to the invincible historical leader of the Cuban Revolution, Commander in Chief Fidel Castro Ruz. (Applause) . Through my words come also the sincere appreciation of all our people for this symbolic gesture. In this act, a history of solidarity and brotherhood that can never be forgotten is synthesized.

Every time Cuba was faced with challenges and urgency that seemed impossible to face and solve, Russia’s generous hand was extended among the first and thanks to this we overcome the challenges. These are the reasons why we feel the warmth that a dear family offers.

Thank you very much (Applause).