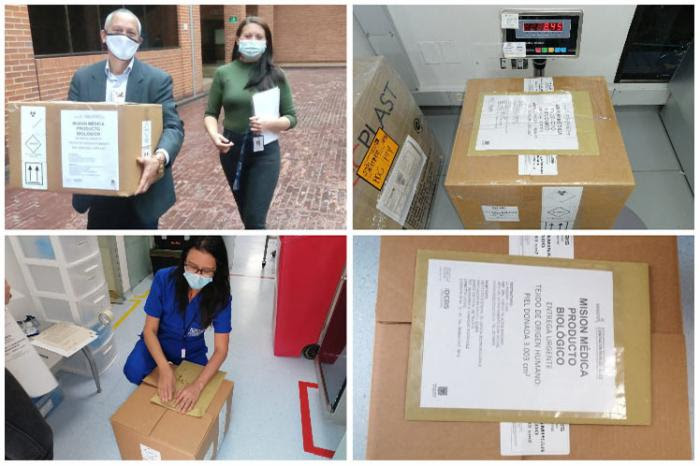 The tissues meet all safety and quality standards for the care of patients who require it.

A donation of 3,000 square centimeters of skin from Colombia will be delivered to Cuba to help in the treatment of those injured in the large-scale fire that occurred at the Matanzas Supertanker Base on August 5, when an electric shock hit a fuel tank.

From the Banco Distrital de Tejidos de Colombia, the sensitive cargo is sent on behalf of the Colombian Ministry of Health and Social Protection, the Mayor’s Office of Bogotá D.C., the Instituto Distrital de Ciencia, Biotecnología e Innovación en Salud, and the Secretaría Distrital de Salud.

The symbolic handover ceremony was attended by the Colombian Minister of Health, Carolina Corcho; the Cuban ambassador, Javier Caamaño; the director of Idcbis Bernardo Camacho; the District Secretary of Health of Bogotá, Alejandro Gómez, among other specialists, according to Prensa Latina.

The respectful solidarity of the Cuban people and government with the sister nation of Colombia, exemplified by the peace process, was highlighted by the Colombian Minister of Health in declarations to Prensa Latina, to which she said: “Of course, as soon as we heard about the tragedy in Matanzas, we mobilized our resources, from our scientific knowledge, to support the Cuban people with what we can collaborate”.

“We want this to be the opportunity to initiate a dialogue with the scientific world in Cuba, which has built a health, pharmaceutical and research sovereignty so that we can share our knowledge”, he added.

He also announced the purpose of achieving a sanitary sovereignty that allows Colombia to produce vaccines, medicines, generate knowledge and science, highlighting the great learning of the Cuban scientific community.

On the other hand, Ambassador Caamaño thanked on behalf of the Cuban people and government for the humanitarian gesture of the District Health Secretariat and the Government of Colombia, as well as their contribution of brotherhood for the people who suffered burns during the fire at the Supertanqueros Base.

The diplomat highlighted as another humanitarian gesture, the interest of the Association of Cuban Residents in Colombia and the Movement of Solidarity with Cuba in financing the shipment.

“Copa Airlines and Wingo, which is its partner, made the decision to cover, also as a donation, the shipment of this skin for our patients in Cuba,” the ambassador emphasized.

He emphasized the participation of the Cuban doctor living in Colombia, Reimundo Llanes, who is a member of the board of directors of the Colombian Association of Public Health for being one of the main promoters of the initiative to send skin to Cuba in the wake of the accident in Matanzas.

The Secretary of Health, Alejandro Gómez, declared that “It is an expression of solidarity on behalf of the National Government and Bogota, for the people who have suffered this tragedy in Cuba (…) We have received and learned a lot from Cuba and it is only natural that today we show our solidarity with this tragedy”.

The director of the Idcbis, Bernardo Camacho, stated that “besides expressing the generosity and international solidarity of this donation with the tragedy, it is the recognition of the high quality and trust that is placed in the District Tissue Bank of the Idcbis to distribute to burn patients who need it for their recovery”.

It is important to highlight that these tissues were rescued from Colombian donors, complying with all the safety and quality standards for the care of patients who require it.

Cuba: Pinar Del Rio Rises up Thanks to Solidarity after Ian’s Passage