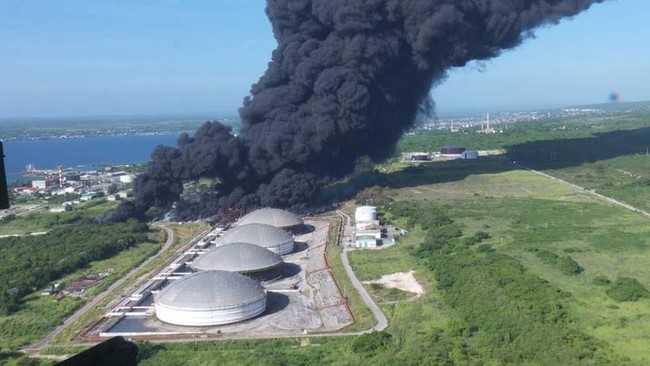 At 7pm on Friday 5 August, lightning struck a tank at the Matanzas Supertanker Base, 62 miles east of Havana. While firefighters worked to extinguish the blaze and keep adjacent tanks cool, a further tank caught fire. As of Sunday 7 August, one person had died, more than 100 were injured and tragically 17 firefighters were missing in the worst fire in Cuba’s history. More than 800 people from residential areas close to the facility have been evacuated.

Cuba appealed for help to contain the blaze, and Cuban President has since tweeted a message of thanks to the governments of “Mexico, Venezuela, Russia, Nicaragua, Argentina and Chile, which have promptly offered solidarity and material aid in the face of this complex situation. We also appreciate the offer of technical advice from the US,” he wrote.

The first of three planes from Mexico arrived on Saturday night carrying 60 members of the Mexican armed forces and PEMEX technicians with experience of dealing with similar disasters. Another two planes were to bring chemicals and other materials to combat fires. In addition, 35 specialist firefighters and technicians from Petroleos de Venezuela, SA (PDVSA) and 20 tons of supplies arrived early on Sunday morning.

At 11pm on Sunday night it was reported that the first tank had stopped burning and was just emitting smoke, but the fire at the second continued.

During the night and early hours of 8 August, the third tank has caught fire after the wind changed direction from the northeast. The area had been evacuatted in advance due to the likelihood of this event.

The second tank has now completely collapsed and the third is burning. Explosions and red skies over Matanzas have been seen as far away as Habana del Este in the capital, Cárdenas in Matanzas, Corralillo in Villa Clara, and other other municipalities.

Residents in Matanzas have been advised to stay inside and wear masks.

With the lid of the third tank exploded, and the collapse of the second tank, the Cuban Ministry of Energy and Mines have describe the situation as very complex. A pump to spray foam is currently being prepared.

CubaDebate reported that efforts to control the fire were working. The water supply to fight the fires has been more stable and containment dams have been created to prevent the spread of the flames.

The Presidency of Cuba reported on its Twitter account that as of 07.00am, the fire at the Matanzas supertanker base was declared under control.

The Cuban Ministry of Health reported that so far 132 people were injured in the fire at the super tanker base in Matanzas. It also reports that 22 are currently hospitalised, two died and 108 have been discharged. There are still 16 people missing.

Cubans have spent the weekend thanking the brave fighfighters and specialists from Cuba, Venezuela and Mexico who fought the fire from the sea, air and land.

In letters sent to his counterparts Nicolás Maduro, from Venezuela, and Andrés Manuel López Obrador, from Mexico, President Miguel Díaz-Canel highlighted the exemplary attitude by the specialists of those nations, who without regard to risks, joined to extinguish the flames.

Messages of solidarity were sent from across Britain including from CSC, the All Party Parliamentary Group of MPs on Cuba and the Fire Brigades Union.

MATANZAS DONATIONS
The Cuban government has set up an emergency bank account for people wishing to help. Donate here.