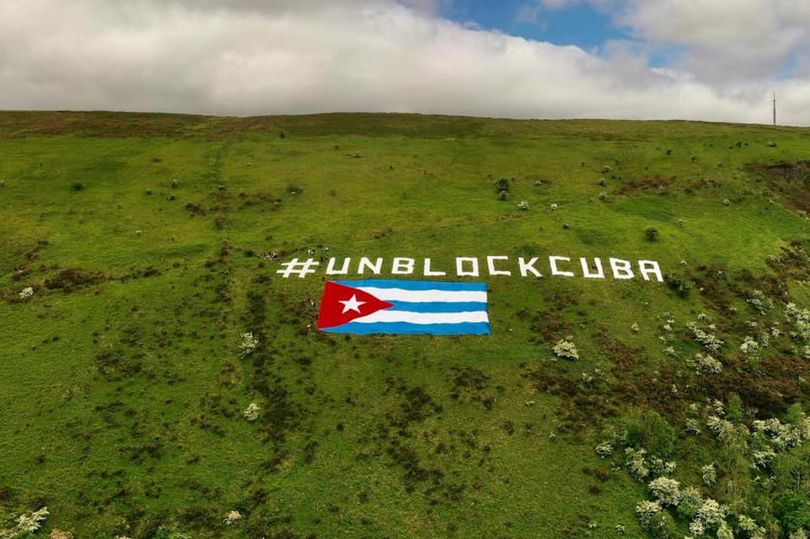 The President of Cuba has thanked his “Irish friends” after the largest Cuban flag in the world appeared on Belfast’s Black Mountain.

The Belfast branch of the Cuba Solidarity Forum Ireland, along with the Gael Force Art, created the 150 by 75 feet banner which appeared on the hillside overlooking the city on Friday.

Alongside the flag were the words and hashtag #UnblockCuba to signify an upcoming vote on the United Nations calling for the US lead blockade of the island state to be lifted.

The action was one of a number of symbolic gestures carried out across the world over the last few days to draw international attention to the trade embargo. A group of volunteers carried the flag up Black Mountain to unfurl it on Friday.

Later, Cuban President Miguel Díaz-Canel Bermúdez tweeted a picture of the flag on Black Mountain along with the words: “The largest Cuban flag in the world sits on the Black mountain Belfast. Ireland will always stand with the people of Cuba and the success of their revolution. #UnblockCuba.”

He also tweeted: “Irish friends and Cubans living in Ireland have placed a Cuban Flag in a mountain in the city of Belfast. The flag is 46 by 23 meters, the largest in the World. With the flag, the giant slogan and its demand to #UnblockCuba.”

On their Facebook page, the Cuba Solidarity group described the placing of the flag as a “moving and beautiful gesture”.

Eoin Davey told Belfast Live that the Gael Force Art team had worked for a number of weeks to produce the flag, much of which was handstitched.

He added: “The people of Cuba are living under this blockade but continue, through the pandemic, to send teams of doctors across the world to help people where they can. To do this with the flag, to show solidarity with them, is the least we could do. So much love and humanity has gone into this act, into the making of the flag, and the act of highlighting the suffering of the people of Cuba who are blocked from getting such basic things as soap and toothpaste and even headache tablets.”

Eoin argued that if US President Joe Biden is proud of his Irish roots, he must act to end the blockade of “another island state that has suffered so much”.

Among those who helped carry the flag onto the hillside was South Down MP Chris Hazzard. The Sinn Fein rep said the move was part of a global push to get the “international community to stand up for Cuba” ahead of the UN General Assembly vote on June 23.

Donald Trump had pursued a hardline policy against Cuba and designating the country a “state sponsor of terrorism” in the final weeks of his presidency.

Then-US Secretary of State Mike Pompeo said the US was designating Cuba “for repeatedly providing support for acts of international terrorism in granting safe harbour to terrorists” – a charge rejected by Havana.

During his presidential campaign last year, Biden promised to reverse Trump policies saying they had “inflicted harm on the Cuban people and done nothing to advance democracy and human rights”.

The flag was later removed by the organisers over concerns it would be damaged if left there too long.