Message of Solidarity from Wayne Smith 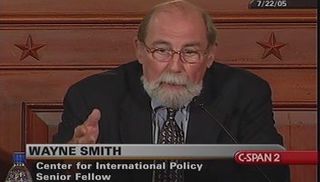 Many thanks to the organizers for organizing this conference that aims to bring about the full normalization of relations between the United States and Cuba. And thanks to all the conferees for their participation in this very important event. I was in the US Embassy in Havana when we broke relations all those years ago on January 3, 1961. It has been a long and difficult road since then. In those early years, our policy was often utterly inane and counterproductive. I was often quoted as saying that Cuba seemed to have the same effect on American administrations that the full moon had once had on werewolves. But then, thankfully, came Obama and a more sensible approach. We now have diplomatic relations, dialogue and freer travel. We have come a long way, but haven’t yet arrived at the full relationship we want. The embargo, for example, remains in place. This National Conference can help bring an end to those last vestiges of a failed policy. It is also important that it help discourage any thought on the part of the new Administration to move back in the opposite direction — toward a policy that long since failed.

Thanks you all for your efforts. I can’t be there, but my heart is with you.

25 thoughts on “Message of Solidarity from Wayne Smith”