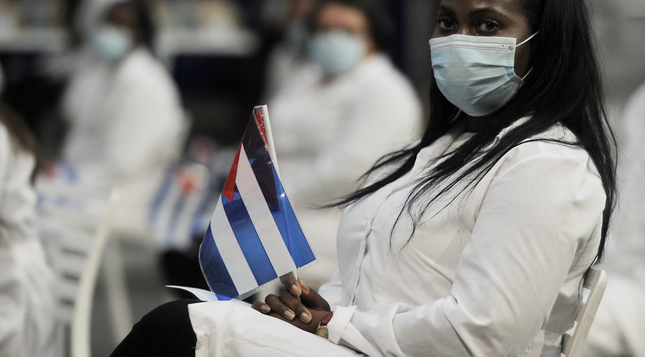 Cuba expects to fully vaccinate its population against COVID-19 by the end of the year — and it’s doing it using homegrown jabs.

When the dangerous and highly infectious Delta variant began to ravage the small Caribbean island of Cuba this year, the government put its faith in vaccines.

As hospitals filled up with patients, depleting oxygen supplies and pushing the nation’s healthcare system to the brink, local health officials raced to vaccinate eligible adults.

Now Cuba, a tiny island whose name often evokes images of cars from a bygone era, is vaccinating its population against COVID-19 at one of the fastest rates in the world. According to Our World in Data, almost 80 percent of the population is partially vaccinated.

It expects to reach “full immunization” against COVID-19 by the end of the year, its President has said.

If successful, it would be the first nation in the world to achieve such a task. And it would have done it all without a single dose of the Pfizer or AstraZeneca vaccines or any secured through the COVAX scheme.

Instead, it is mostly relying on its own homegrown vaccines.

“Cuba knew it [wasn’t] going to be able to access vaccines easily or for an affordable price relative to their economy if they didn’t produce it themselves,” Jennifer Hosek, a Cuba watcher and professor in languages, literature and cultures at Queens University, told the ABC.

“So they thought it’s best if they develop it and produce it themselves.”

Today, Cuba’s nationwide vaccine program is a source of pride for the country.

One of its vaccines, Abdala, is named after a poem by young revolutionary and independence hero Jose Marti, while another, Soberana 2, means “sovereign”.

But the vaccines have also attracted some degree of skepticism, amid concerns around the shroud of mystery surrounding their results.

How Cuba went its own way on vaccines

The island began vaccinating an estimated 141,000 healthcare workers with its homegrown vaccine in March.

By May, the program was expanded to the general population despite the shots not having been cleared through clinical trials. The emergency measure was taken to help combat new coronavirus variants, which had been spreading rapidly in Cuba.

Local health officials say Cuba’s Abdala and Soberana vaccines are safe and effective. They argue they are based on traditional technology used to vaccinate young children for decades.

The vaccines are so-called subunit vaccines, like the Medigen and Novavax shots. They work by directly injecting a small piece of the targeted virus — a subunit — into a person’s body and stimulating an immune response.

“This is different from mRNA vaccines, like Moderna’s and Pfizer’s – as well as adenovirus vaccines, like Johnson & Johnson and AstraZeneca’s, both of which deliver genetic material into the body, and then a person’s own cells produce parts of the virus,” Amilcar Pérez Riverol, a postdoctoral researcher at the University of São Paolo State, told The Conversation.

The Cuban vaccines also do not need to be stored in deep freeze — a potential drawcard for some countries that lack the infrastructure to store other vaccines.

The Abdala and Soberana shots have an efficacy above 90 percent and initial results are similar to those of other top vaccines in significantly reducing transmission, critical illness, and death, according to local officials.

But critics have complained data from late-phase trials have not yet been published in any international peer-reviewed journals. Venezuela’s National Academy of Medicine has also expressed its “deep concern that a product for which there is no scientific information on safety and efficacy … is being administered to Venezuelans” amid plans to roll out the Abdala vaccine there.

Cuba’s three vaccines are yet to be recognized by the World Health Organization (WHO), although Cuba has asked it to start the evaluation process toward officially authorizing them.

In Cuba’s phase 2 trials there was no increase in adverse side effects in those who received the vaccine versus those who got the placebo. But the island’s decision to start immunizing without phase 3 trials showing the full efficacy results in May was viewed as unusual by experts.

“What’s recommended, obviously, is that countries use vaccines that have had their data independently looked at and have had it published and also that it’s been peer-reviewed and gone through a stringent regulatory authority,” Fiona Russell, a research fellow at the Murdoch Children’s Research Institute, said.

“That’s what WHO recommends and the Cuba vaccine hasn’t had that yet … but obviously individual countries, it’s up to them to decide what they want to do given their circumstances.”

India and China’s regulators also permitted mass vaccination campaigns before the completion of Phase three clinical trials, which are conducted to ensure the vaccines prevent infection and illness in humans.

In pushing ahead with the deployment of its COVID-19 vaccines, Cuba became one of the first nations to inoculate children between the ages of two and 10 this month.

In comparison, the United States and many European countries currently only allow COVID-19 vaccinations for children 12 and older.

It has reportedly also started distributing doses of the Sinopharm vaccine, a donation from China.

What has also been in Cuba’s favor so far is that residents appear to be willing to get the vaccine, a stark comparison to other countries experiencing some vaccine hesitancy among their citizens.

But there was one other advantage the Caribbean island had when it decided to go its own way, one that has helped it to become the smallest country in the world to produce a COVID-19 vaccine.

A ‘nation of science’

When President Miguel Díaz-Canel urged his country to make a vaccine in early 2020, Cuba’s biotech sector was mobilized to respond.

The swiftness of the vaccine development, experts say, is partly due to Cuba’s investment in its healthcare and science industries.

It was former president Fidel Castro who declared decades ago that he wanted the Communist-run country to be a “nation of science” investing heavily in the homegrown biotech industry.

The drive saw public funding poured into the Finlay Institute, paving the way for more research and pharmaceutical manufacturers in Cuba.

Cuban scientists are also behind some innovative treatments, including a lung cancer vaccine which is in trials with the US.

And along with being the only Latin American country, outside of Brazil, with the capacity to manufacture a vaccine domestically, Cubans enjoy free universal healthcare and the world’s highest ratio of doctors to citizens.

At the same time, Cuba is also in the midst of one of the worst economic crises to hit the island since the fall of the Soviet Union.

Under a severe trade embargo from the US, the island has struggled to secure access to syringes and is grappling with food shortages, a lack of medicines, and medical oxygen.

But Cuba’s government should not be underestimated, according to one Cuban economist, even when faced with an acute fiscal crisis while at the same time trying to develop an entirely new vaccine against the backdrop of a global pandemic.

“The Cuban government has like a Ph.D. in managing this kind of a complex crisis,” Pavel Vidal told NPR.

While its faith in homegrown vaccines has been a gamble that may soon pay off as it aims to fully vaccinate its population and secure commercial arrangements with other countries, Cuba could also find itself at the centre of a vaccine “cold war”.

Throughout the pandemic, Cuba has declined to import foreign vaccines from multinational pharmaceutical companies or sign up for the COVAX scheme. Instead, it has mostly focused on developing its own vaccines.

While there has not been a clear explanation for this decision, Vicente Vérez Bencomo, director-general of the state-owned Finlay Institute of Vaccines in Havana, has previously said Cuba was hesitant to rely on the international community.

“There are international initiatives that I respect tremendously. That I respect them is one thing — whether I believe in them is another,” he told Nature.

“We wanted to solely rely on our own capacities to vaccinate our population, not on other people’s decisions. And life is proving us right.

“What we’re seeing across the world is that vaccine supplies are being hoarded by rich countries.”

Cuba’s self-sufficiency on the vaccine front has set it apart from much of the world, where most vaccine doses made so far have gone to largely affluent nations. Many poorer nations are struggling to get access to doses.

BioCubaFarma says it has the annual capacity to produce 100 million doses, which would allow the country to supply its allies and others as they battle their own shortages and surging cases.

Scientists say the government will likely give away some doses to poor countries as well. Other countries have already inked deals with the island, which began commercial exports of its homegrown COVID-19 vaccines this week.

It has sent shipments of the three-dose Abdala vaccine to Vietnam and Venezuela. Another of its vaccines is being produced in Iran, while Argentina and Mexico have said they hope to produce the innoculations soon.

Medical diplomacy is a longstanding tradition in Cuba. The island’s medical force, dubbed the Henry Reeve Medical Brigade, was sent to at least 37 countries to help in the fight against the coronavirus.

But Dr Hosek fears there will be a new kind of “cold war” politics built around the distribution of vaccines.

“I see the international landscape changing, in that the decisions that countries make about which vaccines are going to be accepted for people traveling into their country are going to be related to the geopolitical relationship that that country has with the other country,” she said.

Dr. Hosek believes these tensions may only continue to grow as countries race to secure their own vaccines, with distribution potentially divided around certain “blocs”.

“I think it’s very questionable that it’s as much about the efficacy and/or the efficiency of a particular vaccine as it is about the geopolitical relationship between the countries in question,” she said.

“… Right now, we have the problem with vaccines that they are available unevenly, and besides creating havoc in the countries that are the have-nots, it’s also creating the opportunity for variants to emerge.”

Cuba prepares to open to tourists

The small communist island nation remained largely sealed off from visitors last year, and managed to contain the virus by sending doctors door to door searching for infected residents who were directed to stay in state-run isolation centres.

But after opening its airports at the end of 2020, it experienced a surge of COVID-19 cases at the start of this year.

Since then, it has battled to contain the virus as its healthcare system has become overwhelmed.

At the same time, the Caribbean nation has suffered from a collapse in exports – creating shortages of food, medicine and other essential goods.

The hope is that its race to vaccinate will soon enable Cuba to once again open to travelers, just in time for its tourist high season.

A statement from the Ministry of Tourism quoted in the Communist Party newspaper Granma said once borders reopen, it will no longer require travelers to take a PCR test upon arrival.