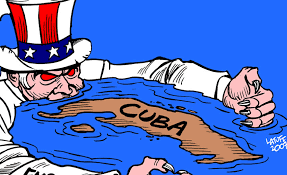 By Danny Glover and Arturo O’Farrill on November 12, 2021

After successfully vaccinating 90% of its population with at least one dose of the COVID-19 vaccine, Cuba has lifted its quarantine and is reopening the country to tourism. This is impressive for any country, let alone a small island nation that the U.S. has tried to permanently isolate from the world.

SOS Cuba groups have responded to this reopening with protests against the Cuban government, blaming the government for shortages of medicine and basic necessities. The reality is the U.S. government’s Cuban embargo has made it extremely difficult for Cubans to get vital medical supplies and enough raw materials to share their vaccines around the world to their full production potential.

The fact that 74% of Cuban Americans support lifting the U.S. embargo on medicine to Cuba paints a stark contrast to the vocal but minority view of the SOS Cuba campaign.

During the Obama administration, it seemed there was hope for a new era in U.S.-Cuba relations. This new era was quickly dashed when President Trump came into office and reversed every decision President Obama made on Cuba, including redesignating Cuba as a state sponsor of terrorism, despite the lack of any evidence to support this move. As a result, companies attempting to sell medicine or medical devices to Cuba are potentially at risk of incurring criminal fines or possible prosecution.

Despite their economic isolation, Cuba developed five internationally recognized candidate COVID-19 vaccines, two of which have passed phase III trials and received emergency authorization. Tragically, some Cubans suffered unnecessarily or died due to a syringe shortage caused by the U.S. embargo.

Fortunately, the nonprofit organization Global Health Partners secured one of only three licenses in years to donate 6 million syringes to Cuba, enabling nearly every Cuban citizen to get vaccinated. While they have finally secured enough syringes for the population, Cubans are still suffering from a lack of ventilators, PPE and other COVID-related medical supplies.

Even worse, the country is experiencing a shortage of medicine for numerous ailments, including asthma inhalers, glaucoma and scabies medicines, and antibiotics. While the Cuban Democracy Act of 1992 allows for exemptions to be made for medical supply donations, the red tape around applying for licenses and the potential to incur a financial penalty has scared off nearly every company from selling medical supplies to Cuba or to organizations trying to donate them to Cubans.

On top of this, Cuban citizens are unable to purchase medicines individually due to the Trump administration banning remittances. The Cuban people hoped that the Biden administration would undo the harm that Trump has brought upon the country and return to the Obama administration’s Cuban policy. On the campaign trail, Biden pledged to reverse Trump’s Cuba measures, which he said, “have inflicted harm on the Cuban people and done nothing to advance democracy and human rights.”

Unfortunately, he has yet to live up to that pledge and has continued the harmful policies of his predecessor.

Beyond the damage this medical blockade has inflicted on Cubans, it has prevented countless people around the world from receiving the vaccine. Even with their limited resources, Cuba provided 1 million doses of their COVID-19 vaccines to Vietnam, 930,000 to Venezuela and 100,000 to Iran. They have plans to send 5-10 million more to Vietnam, 12-15 million more to Venezuela and agreements with Mexico and Nicaragua to provide their vaccine, but the U.S. medical blockade puts all of this in question.

It should be clear that this pandemic will not be over until all countries can vaccinate their people, and the longer that people go unvaccinated, the more variants will emerge and present new threats to the world. None of us are free from the pandemic until all of us are. We are calling on President Biden to immediately lift all restrictions on medical and humanitarian aid to Cuba by allowing all medical aid licenses to Cuba be granted automatic approval, removing Cuba from the State Sponsor of Terrorism list, and lifting all restrictions for Cuban Americans to send remittances to their families in Cuba. President Biden has the power to overturn Trump’s Cuba policy today through executive order and end the suffering of millions. Doing so would not only help vaccinate the global population and give Cubans access to vital medicine but also open the door to better relations with Cuba going forward.

Danny Glover is an actor, film director and political activist. Arturo O’Farrill is a Grammy-winning jazz musician, pianist, composer and director of the Afro-Latin Jazz Orchestra.