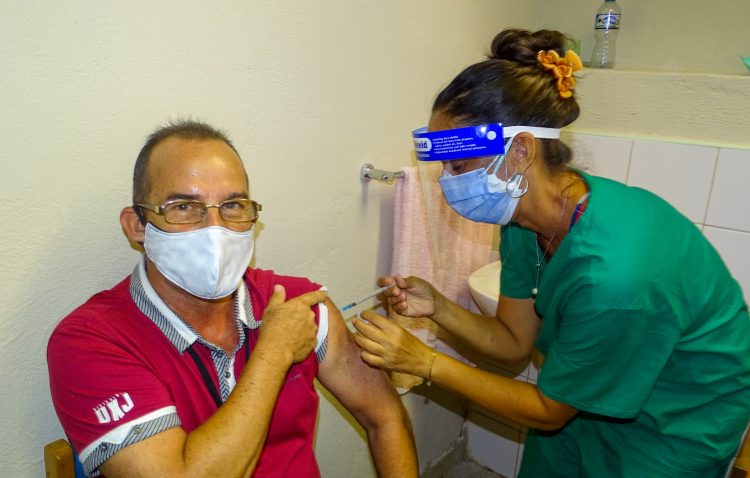 The President of the Republic, Miguel Díaz-Canel Bermúdez, reiterated to be alert to the risk posed by the late arrival of SARS-CoV-2 positive elderly people to the hospital care system.

This week has been consolidating the trend of decreasing cases of COVID-19, only in two days there were more than a thousand, but we must continue to care for people with certain situations of vulnerability, especially the sick elderly.

The First Secretary of the Central Committee of the Communist Party of Cuba (PCC) and President of the Republic, Miguel Díaz-Canel Bermúdez, reiterated to be alert to the risk posed by the late arrival to the hospital care system of elderly people positive to SARS-CoV-2 virus with complications.

The President made the call at the meeting this Saturday of the temporary working group of the Government for the prevention and control of the pandemic, where he pointed out that it is these incidences that are most influencing the level of deaths from the disease, which, although not high, must be reduced, he said.

People of very advanced age are dying with a group of complications, and it is necessary to prevent them from running these risks, and in this, he said, the measures taken in the primary care system have a great influence, where the family physician must visit them systematically to determine if there are any cases with these complexities.

When making an evaluation of the COVID-19 epidemic in Cuba at the present time, when it is being brought under control, Díaz-Canel stressed that these results are closely linked to the effectiveness of Cuban vaccines and the immunization of the population, even in conditions of the presence of the omicron variant.

In the world, in most countries, the peak caused by this strain has exceeded even the previous ones; however, in Cuba it has remained well below those we had previously, emphasized the First Secretary.

This is another demonstration that the country’s strategy to develop our vaccines and immunize the population has been effective, added Díaz-Canel, who called, however, to continue accompanying the good results with measures to prevent people with vulnerabilities from reaching the severe or critical stage.

“This is what we have to focus on now,” said the President of the Republic at the Saturday meeting of the Government’s temporary working group, which interacted via videoconference with political and government authorities from the 15 provinces and the special municipality of Isla de la Juventud.

Today the country, Díaz-Canel reflected, remains under the new normality, it has fewer restrictions than at other times, the school year continues to develop, and the economic activity is developing and reactivating, and I think this is how we should continue working, he said.

In the exchange, which was centered, as usual, on a presentation by the head of Public Health, José Angel Portal Miranda, it was proposed, and approved, to eliminate the compulsory quarantine measure for travelers from South Africa, Lesotho, Botswana, Zimbabwe, Mozambique, Namibia, Malawi and Esuatini.

The decision, Portal Miranda argued, is based on the current epidemiological situation worldwide and particularly in Cuba. Travelers coming from those countries are also exempted from the compulsory taking of samples at the entrance to our ports and airports, and will be governed by the protocols applied to those arriving from other places.

The meeting of the temporary government working group was attended by the member of the Secretariat of the Central Committee, Jorge Luis Broche Lorenzo, and the deputy prime ministers Inés María Chapman Waugh, Ricardo Cabrisas Ruiz, Alejandro Gil Fernández, and Jorge Luis Perdomo Di-Lella, as well as heads of portfolios and other authorities.