Italian Senate Initiative against US Blockade of Cuba 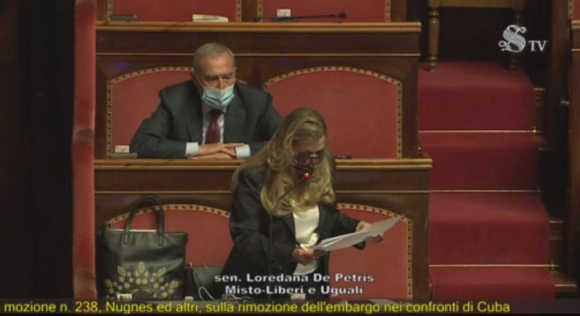 Havana, April 14 (ACN) The Italian senate adopted a motion on Wednesday calling for the lifting of the US economic, commercial and financial blockade of Cuba, which is the main obstacle for the island’s economic and social development.

The motion, which was passed with 172 votes in favor out of 194 in all, urges the Italian government to join other European cabinets to take action against the US sanctions on Cuba.

Cuban ambassador to Italy Jose Carlos Rodriguez thanked the Italian lawmakers who voted the motion against the US blockade.

Italy has always been a friend of Cuba and in tune with the call by Pope Francis, this motion calls on the Italian government to join the European Union against the US blockade of Cuba, said Senator Loredana De Petris in statements to the website of the Italian Parliament Radio station.

59 thoughts on “Italian Senate Initiative against US Blockade of Cuba”