Statement from the Cuban Mission, NYC 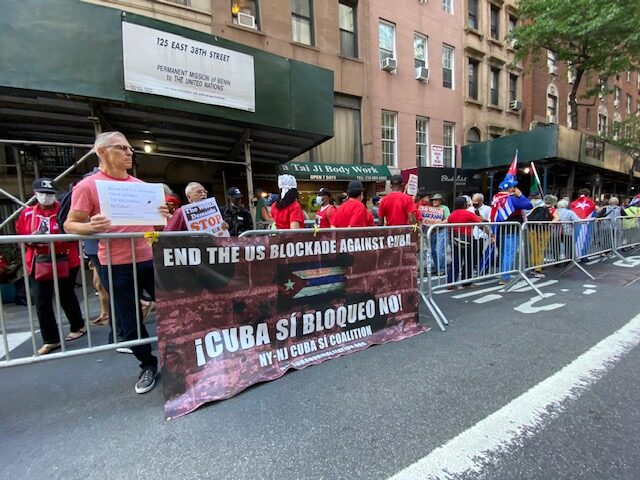 The disturbances and incidents that took place in some localities in Cuba, on 11 July, are the result of a plan designed by the government of the United States to opportunistically exert the greatest possible pressure against our country, at a time when we are facing a complex situation derived from 16 months of confronting the pandemic and its current resurgence, in addition to the severe tightening of the blockade and the brutal restrictions imposed on the Cuban people.

This has seriously affected the normal functioning of the Cuban economy by critically reducing income from exports of goods and services, access to fuel, medicines and medical supplies. In addition to this, there are other measures such as the failure to grant the number of visas for emigration and temporary travel to the United States and the suspension of consular services in Cuba, which considerably limits travel by Cubans.

These measures are intended to present a collapsed country in chaos, in order to provoke a social outburst and justify an external intervention. The participation of the United States has been demonstrated. The financing granted to individuals in Cuba and abroad to create groups in our country to foment internal disorder, provoke and carry out acts against institutions and commit terrorist actions is public. It is also public and well known the encouragement and instigation of acts of confrontation against Cuban institutions and laws, through media campaigns with lies and distortions of the Cuban reality.

Attempts have also been made to discredit the Cuban government in relation to the handling of the pandemic and to undermine the national epidemiological indicators, which reflect the results of the intense work done in order to save human lives. As a result of this joint effort, we have one vaccine of our own and four other vaccine candidates.

We denounce, in the strongest terms, the violent acts promoted and executed by criminal elements, including attacks to law enforcement bodies. The plan that provoked the incidents of 11 July has failed. The normal functioning of the institutions is maintained, under the conditions imposed by the health emergency. The Cuban State and Government and its institutions are in full control of the situation.

The Government has taken and will take the necessary measures to guarantee the peace and tranquility of citizens. At no time, as some have maliciously claimed, have the Cuban authorities called for confrontation and violence among fellow citizens. We have turned to our people who, as they have always been, are the protagonists in the defense of the Homeland against mercenary aggressions, terrorist attacks, economic sabotage plans, coercive economic measures and other destabilization plans. The instigation to divide Cubans comes from abroad.

We strongly denounce the campaign of disinformation and discredit articulated from Washington. In the face of these maneuvers and attempts to project an image of instability, undermining the tranquility of citizens and our rule of law and social justice, the peace-loving Cuban people, with a profound humanist vocation, will not give in an inch in the construction of an inclusive, democratic, prosperous and sustainable society with all Cubans and for the good of all Cubans.

Permanent Mission of Cuba to the United Nations

Attempting to reassert its once-dominant influence, U.S. has a tough sell in Latin America