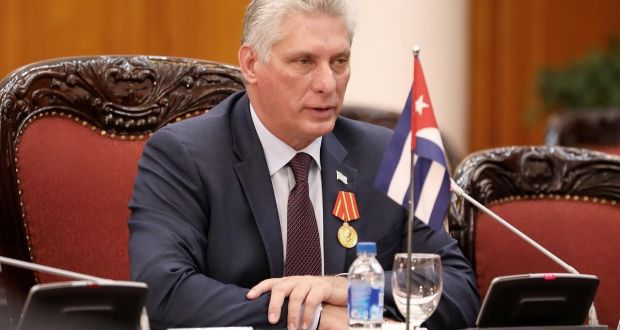 HAVANA, Cuba, May 4 (acn) Cuban president Miguel Diaz-Canel called today to promote international cooperation and solidarity to confront COVID-19 and pointed out that “it is our responsibility to unite wills and efforts to face this immense challenge.”

Our commitment will be decisive, let us do it for the right to health, peace and development of our peoples, with strict adherence to the founding principles of the Movement, let us do it for life, he said when speaking in the Virtual Summit of the Non-Aligned Movement (NAM) Contact Group which took place today under the motto “United against COVID-19”.

The president pointed out that COVID-19 has proven to be a global challenge; it does not distinguish borders, ideologies or levels of development, hence the response must also be global and joint, overcoming political differences.

It is not possible to accurately predict the size of its consequences, the high number of infected and the large human losses show its devastating impact in an increasingly interconnected world that, however, has not been able to enhance that interconnectedness in solidarity and today it pays the price for its inability to correct serious social imbalances, he said.

Diaz-Canel asserted that solidarity and cooperation are lacking and expressed that these are values that cannot be linked only to profits, an almost exclusive motivation of those who, worshiping the market, forget the value of human life.

This pandemic has demonstrated the fragility of a fractured and exclusive world, he noted and called for advocating an end to wars, including unconventional ones, to safeguard the right to peace and also rejected recent and serious military threats by the United States government against Venezuela.

He affirmed that Cuba is willing to share its experiences with the NAM member countries, which are linked by historical ties of friendship.

The evolution of the epidemic in Cuba in the last two months is showing how much social investment policies can impact in facing the biggest and most unexpected challenges, he stated.

He added that scientific development has allowed the successful treatment of dissimilar communicable diseases, both in Cuba and in other nations, and highlighted that 25 brigades of Cuban health professionals have joined the efforts of 23 countries in the last month to combat the pandemic, joining those already providing services in 59 states.

The Cuban president also took the opportunity to congratulate Uganda, who will assume NAM presidency from 2022 and assured them Cuba’s full support.

Diaz-Canel was accompanied by the Ministers of Foreign Affairs and Public Health, Bruno Rodriguez and José Angel Portal, respectively.

The videoconference was attended by representatives of at least 15 states of the regional groups: Africa, Asia-Pacific, Latin America and the Caribbean, and Eastern Europe, as well as representatives of various United Nations (UN) organizations.