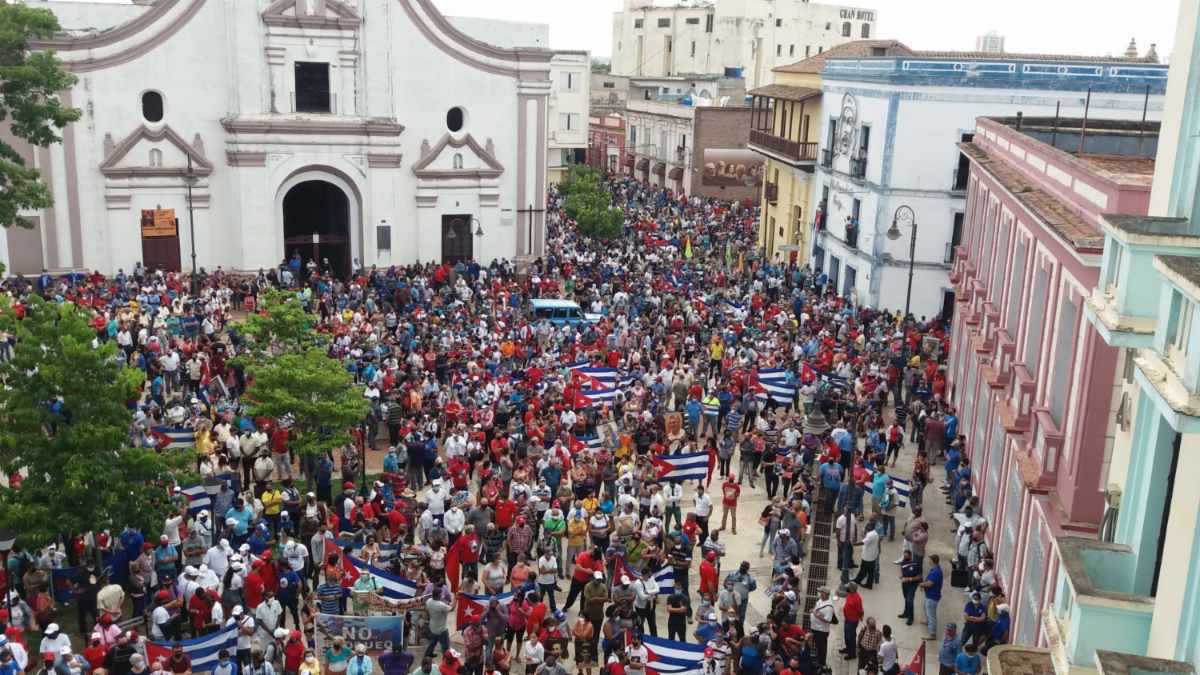 IFCO/Pastors for Peace unapologetically stands in solidarity with our Cuban family during this difficult time. We recognize that the combined impact of the devastating pandemic and an economic crisis fueled by the 60-year old U.S. blockade gripping the country is creating tremendous hardship for our Cuban brothers and sisters.

While the mainstream media is painting a picture of severe unrest in Cuba, we know that there have been far more expressions of support by the Cuban people for their revolution and their government all across the island including Guantanamo, Cienfuegos, Las Tunas, and others. It’s not lost on us, that U.S. corporate media covered the recent protests in Cuba involving a few hundred people with the sympathy not afforded the millions of multiracial protesters against lethal police brutality in the U.S.

Immediately, President Diaz-Canel took to the streets to talk directly with the Cuban people. This is not the course of action of a defeated government. Nor is it the action of an unconcerned government. The Cuban president denounced misinformation efforts and foreign interference. He called on all Cuban citizens to take to the streets to defend the Cuban revolution.

Meanwhile, U.S. President Joseph Biden, who promised to ease restrictions on Cuba when he was running for President, issued a statement saying he “stands with the Cuban people”. The truth is, if the President truly supported the Cuban people, he would end the cruel, immoral, and illegal blockade that is causing the suffering that the Cuban people are being forced to endure. Both Republicans and Democrats routinely shed crocodile tears for Cubans, even as they dig the knife deeper in their backs by strengthening the longest running military siege in modern history.

It is curious that this undermining of Cuba is happening just after the majority of the members of the UN General Assembly voted again, for the 29th year in a row, to condemn the U.S. for its economic blockade…once again isolating the U.S.

It’s hard to believe that this recent unrest is not a result of outside agitation aimed at fomenting regime change in Cuba. The countless attempts to undermine Cuba since 1959 are continuing.

USAID is currently offering grants up to a million dollars to groups who will ‘bring democracy to Cuba’.

Secretary of State Blinken has continued Trump’s ‘policy’ of accusing Cuba of “human trafficking”; claiming that Cuban doctors are subjected to “forced labor” and equated as slaves. A special immigration parole was developed to entice them to defect. This is an obvious attempt to counter the goodwill Cuba has gained by its health internationalism.

The U.S. has discredited Cuba’s international cooperation in the field of health even though its international medical program has been recognized by dozens of governments, the United Nations, the World Health Organization, and other international organizations.

In fact, access to healthcare is a human right in Cuba but a daily struggle for 29 million people in the U.S. who live without health insurance, according to the Kaiser Family Foundation.

At least 40 different resolutions have been passed by churches, city councils, labor unions, state legislators and school boards calling for an end to the U.S. blockade against Cuba. These resolutions represent the will of more than 30 million people in the United States.

As the National Network on Cuba has reported, these 30 million people join:

* Cuban Americans whose families are suffering and have initiated car and bike caravans in Miami and other cities across the U.S. and around the world.

* Generous people who in a few short weeks donated more than $500,000 to send syringes to Cuba so the five COVID-19 vaccine candidates developed by Cuban scientists could be administered

* A group of dedicated Cuban Americans walking in a peace pilgrimage from Miami to Washington DC to call on President Biden to end the blockade. It’s time to Let Cuba Live…and the end the economic stranglehold of the Cuban people. U.S. out of Cuba!!

Eyewitness Report From Havana: Cuba’s Struggle Against US Imperialism